How Virginia Blew Up ‘Larry Elder Was Wrong Candidate’ Narrative 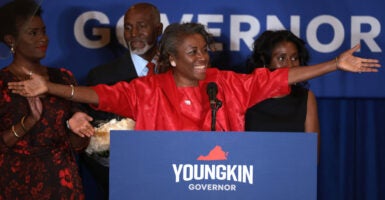 The successful Republican candidate for lieutenant governor of Virginia, Winsome Sears—seen here on election night Nov. 2 in Chantilly, Virginia—and her running mate, Gov.-elect Glenn Youngkin, were subjected to some of the same hateful attacks by liberal media outlets that were leveled at Larry Elder, the unsuccessful black GOP candidate for governor of California. (Photo: Chip Somodevilla/Getty Images)

After the California gubernatorial recall election, many pundits—as well as my opponent’s campaign manager—pushed the narrative that “Larry Elder was a gift” to Gov. Gavin Newsom.

A kinder, gentler Republican, they insisted, one who distanced himself from the loathsome former President Donald Trump, would have made all the difference in the world, despite the fact that 75% of California voters are registered as Democrats or independents.

CNN’s Lincoln Mitchell wrote: “Elder was precisely what Newsom needed to make the fear of Trumpism real in the eyes of California’s substantial Democratic majority. Elder, a longtime conservative talk-radio host, is well known among right-wing Californians, but many other voters have only gotten to know him in more recent weeks.”

A San Francisco Chronicle headline read: “Larry Elder Is the Trumpist Who May Save Gavin Newsom’s Job.” After the race, Politico asserted: “By Labor Day, Newsom had turned what started as an up-or-down vote on his governorship into a choice between him and Elder, the radio-show host Newsom relentlessly tethered to Trump. … For Newsom, the emergence of Elder as the GOP’s standard-bearer was an unexpected gift.”

The hysterical reaction to the Republican victory demonstrates that any Republican, especially a black one, would have faced the same unhinged attacks leveled against me during my campaign.

After the Republican victory in Virginia, in which Sears, a black female Marine vet with a master’s degree, was elected lieutenant governor, black MSNBC pundit Michael Eric Dyson said: “The problem is, here, they want white supremacy by ventriloquist effect. There is a black mouth moving, but a white idea … running on the runway of the tongue of a figure who justifies and legitimates the white supremacist practices.”

I did not invite Trump to campaign for or with me. Neither did Youngkin. Like Youngkin, I support school choice, oppose vaccine mandates, and am pro-life. Unlike in the Youngkin race, Trump did not publicly endorse me. Still, Newsom described me as “more Trump than Trump.” In Newsom’s ungracious victory speech, he said: “We may have defeated Trump, but Trumpism is not dead.”

About Virginia, CNN’s black pundit Van Jones said: “The stakes are high. When this election is over in Virginia, we will know. Have we seen the emergence of the delta variant of Trumpism? In other words, Youngkin, same disease, but spreads a lot faster and can get a lot more places.”

After Youngkin’s victory, Jemele Hill, a black former ESPN host, tweeted: “It’s not the messaging, folks. This country simply loves white supremacy.” Black MSNBC host Joy Reid said: “You have to be willing to vocalize that these Republicans are dangerous. … Stoking that kind of soft white nationalism eventually leads to the hardcore stuff. It leads to the Jan. 6 stuff.”

Soft white nationalism? Black NBC pundit Jason Johnson said: “This was about how white kids feel talking about what black kids go through. Let’s just call it what it is.”

Virginia Democratic Sen. Tim Kaine said: “If you look at the Youngkin campaign, they’ve made it about kind of invented, inflated issues like critical race theory. … It’s unheard of, and it hearkens back to a long tradition in Virginia history.”

The election of a black, female lieutenant governor, whose Jamaican immigrant father came to America with $1.75 in his pocket, “hearkens back to a long tradition in Virginia history” of Jim Crow segregation?

Black Democratic National Committee Chairman Jaime Harrison said: “This is a dog whistle to divide people. … It is about racial divisions, racial hatred, racial animosity. … It’s sad to see where the Republican Party is going because they have become a party of fascism and fear.”

During my race, a Los Angeles Times headline read: “Larry Elder is the black face of white supremacy. You’ve been warned.” As for fellow “white supremacist” Lt. Gov.-elect Sears, it’s nice to have company.