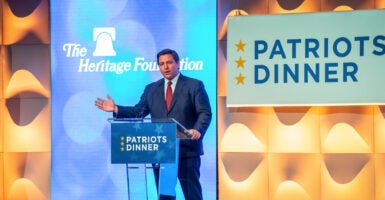 “Big Tech is something we have to take head-on,” says Florida Gov. Ron DeSantis. “They are hurting our country and they're hurting our society.” (Photo: Proview Events for The Heritage Foundation)

ORLANDO, Fla.—President Joe Biden and the “entrenched political class” are ruining America with the help of a corrupt and partisan corporate media, says Florida Gov. Ron DeSantis, who promised to lead the fight against the current regime.

DeSantis reserved some of his strongest criticism for the “elites” and “globalists” who he said have led America astray.

“Biden really represents potentially the culmination of—or, I mean, hopefully, the coup de grâce of—this entrenched political class that has really ruined a lot about our country over the last generation. It’s not limited to just Democrats,” DeSantis said. “There’s a uni-party in Washington, D.C., and they look out for themselves more than the rest of the American people.”

He added: “Our ruling class doesn’t think [there’s] anything distinctive about American citizenship. That’s why they would consider paying reparations to people that came across our border illegally, because they think people have a right to come, regardless of the laws and Constitution of the United States.”

Biden recently acknowledged his administration was considering payments to illegal immigrants who were caught illegally entering the United States. The Wall Street Journal reported the payments could be as much as $450,000 per illegal immigrant.

“You deserve some kind of compensation, no matter what the circumstance,” Biden said Nov. 6, while disputing the $450,000 figure. “What that will be, I have no idea.”

“He’s failing across the board,” he said, “and I think it’s causing more and more people to look and recognize the failures of leftist governance.”

Despite Democrats’ having control of the White House and Congress, Biden’s party is struggling to enact its agenda. DeSantis said it’s a blessing their numerical margins are so narrow in both the House and Senate. Otherwise, lawmakers would be attempting to pack the Supreme Court, abolish the Electoral College, federalize our elections, and grant D.C. statehood.

The disconnect between the American people and their representatives in Washington has far-reaching consequences, DeSantis warned, and not just domestically. He said Biden’s policies would embolden our foreign adversaries, particularly China.

“These elites have done more than anybody to facilitate the rise of China,” he said. “You look at the next three years. What’s China’s going to do? They watch Biden floundering around. These people are really tough. They’re going to make sure that they exact a huge amount of price based on Biden’s failures.”

Unfortunately, DeSantis said, there’s no accountability in Washington, D.C.—a problem he blamed on media outlets. He singled out Dr. Anthony Fauci, chief medical adviser to Biden and director of the National Institute of Allergy and Infectious Diseases.

>>> Florida Gov. DeSantis: ‘We Chose Freedom Over Fauci-ism, and We’re Better Off for It’

“If you’re in the club in D.C., there’s no accountability. How the hell else does Fauci still have a job?” DeSantis said. “Part of the reason that’s true is because we have a very corrupt and partisan corporate media in this country, and they really serve as the Praetorian Guard for these elites.”

Several years ago, conservatives could turn to social media to bypass these media outlets. Today, some of those companies—particularly, Facebook, Google, and Twitter—now routinely censor alternative viewpoints.

As governor, DeSantis worked with state lawmakers to hold those companies accountable. The law, signed May 24, gives Floridians the power to sue technology platforms.

“Big Tech is something we have to take head-on, and I’m not somebody who believes that because they’re private, they can do whatever the hell they want to,” he said. “They are hurting our country, and they’re hurting our society.”

DeSantis promised more action to counter the Biden administration and other left-wing politicians. He vowed to stand up for traditional American values and against the teaching of critical race theory in schools.

“We’re not spending tax dollars to teach our kids to hate our country, or to hate each other,” he said. “That is not going to happen here.”

And when Florida enacted election reforms earlier this year, DeSantis made clear he wouldn’t be intimated by the left’s threats or corporate protests. He told CEOs they could become political actors, but would face pushback for doing so.

“The result was the Legislature passed the bill. I signed the bill. The left had a spasm; the media had a spasm. But the businesses didn’t say anything in Florida, because they understood I’m not going to let them smear my people, my legislators, or me with these false narratives,” he said. “Virtue signaling has a cost in the state of Florida, and the cost is me fighting back.”

>>> Myth vs. Fact: Don’t Be Fooled by Misinformation on Florida’s Election Reforms