Florida Gov. DeSantis: ‘We Chose Freedom Over Fauci-ism, and We’re Better Off for It’ 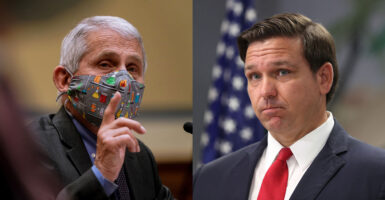 ORLANDO, Fla.—Gov. Ron DeSantis delivered a blistering critique of President Joe Biden and his authoritarian policies, warning Americans they need to fight against the radical left to preserve our freedom.

The emergency rule from the Occupational Safety and Health Administration requires employers with 100 or more employees to make sure that those workers get the COVID-19 vaccine or submit to weekly testing.

“If the federal government can get away with this, they’re going to be able to get away with a lot more,” DeSantis, a Republican, warned in his Thursday speech. “Next year, maybe it’s something you care about, or two years from now. It’s important that we take a stand, and it’s important that we say, ‘No, no mandates, no restrictions. We’re not going to let you take away our freedom.’”

From the early days of the pandemic, DeSantis has attracted headlines for what admirers call his balanced approach—a contrast to other states that embraced lockdowns, school closures, and restrictive policies.

“While other states kept locking people down, Florida lifted people up. We did not subcontract out leadership to Dr. Fauci,” DeSantis said. “I saw governor after governor just hide behind the bureaucrats and do all these destructive things.”

DeSantis, who is in his third year as governor, said he wanted Americans to associate Florida with freedom—a state that wouldn’t impulsively follow orders from Washington. He singled out Dr. Anthony Fauci, chief medical adviser to Biden and director of the National Institute of Allergy and Infectious Diseases.

According to the Centers for Disease Control and Prevention, Florida is the only state with a “moderate” level of community transmission. The CDC determines the level of such transmission “based on the number of cases in the last seven days per 100,000 population and the number of tests in the last seven days that have a positive result,” according to the CDC’s website.

As of Monday, the other 49 states, plus the District of Columbia, have either a “high” or “substantial” level of community transmission. (The map below is from the CDC’s website.)

DeSantis cited Biden’s vaccine mandate as an example of the left’s overreach. OSHA announced its emergency rule Nov. 4 and set a deadline of Jan. 4 for companies and other organizations to comply. At least 27 states and numerous private employers are challenging the OSHA rule, arguing it is unlawful and the federal government lacks the authority to impose a vaccine mandate.

In a ruling Friday, a three-judge panel of the U.S. Court of Appeals for the 5th Circuit—covering Louisiana, Mississippi, and Texas—blocked OSHA from implementing its rule. Other cases are pending in other circuit courts.

>>> Learn more: Resources and tools on the COVID-19 vaccine mandate

DeSantis said Biden’s mandate would have far-reaching consequences at a time when many employers are already struggling to find workers and navigate the supply chain crisis.

“When you look at how this would impact key sectors—health care with these nurses, truckers, all these other areas—if just 1% of them fall off and lose their jobs, you’re going to see huge problems,” he said. “That’s going to have a ripple effect all throughout the American economy.”

There’s also a disregard for science, DeSantis said. He pointed to medical research on natural immunity from Israel and the Cleveland Clinic, showing it is as effective or more effective than a COVID-19 vaccine.

“They literally want to fire somebody who’s immune already for not getting the jab, even though that person has better protection than the people that have something like the Pfizer,” DeSantis said. “It makes no sense.”

Dr. Martin Makary, a surgeon who is a professor at Johns Hopkins University School of Medicine and Carey Business School and editor of Medpage Today, recently spoke at The Heritage Foundation about natural immunity. He noted in a Wall Street Journal commentary that natural immunity “is effective and durable, and public-health leaders should pay it heed.”

Yet despite the scientific evidence and large number of vaccinated Americans—nearly 60% are fully vaccinated—DeSantis also predicted Americans would be asked to make more sacrifices in the future. (The vaccines produced by Pfizer-BioNTech and Moderna require two doses; the vaccine from Johnson & Johnson requires one dose.)

“I said this the other day and the media got mad, but it’s true. Six months from now, if you have two shots, you are going to be considered unvaccinated. They will deny that now. I understand that,” DeSantis said. “But just remember they said it was only going to be 15 days to slow the spread, and look where we are.”