Democrats Have Only Themselves to Blame for the Inflation Fiasco 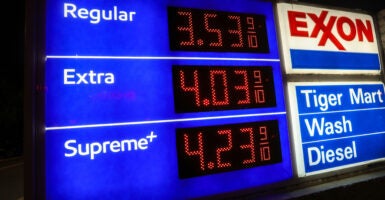 It’s been quite a spectacle watching people who credit Democrats with every job created and every percentage point gained in economic growth suddenly arguing that the White House is completely powerless in the face of our current economic predicament.

Presidents generally get far too much credit and/or blame for our fortunes, but they can certainly exacerbate existing problems. And our political class has certainly aggravated them with unbridled spending and support for policies that disincentives work and inhibit energy production.

Wholesale prices rose 8.6% from a year ago in October, another record annual gain and the biggest spike in more than a decade. Inflation hit 6.2%, the highest rate of annualized inflation since the 1990s. Whereas once voters were promised “transitory” inflation, today, economists warn that we’ll be in this for a while.

“Reversing this trend is a top priority for me,” President Joe Biden said Nov. 10, after months of his administration’s dismissing inflation as a “high-class” and short-term predicament—there’s “nobody suggesting there’s unchecked inflation on the way—no serious economist,” the president promised a few months ago. Biden’s National Economic Council Deputy Director Brian Deese had argued that inflation was actually a good thing, and the entire administration had pushed the notion that the best prescription to alleviate inflation was more big progressive spending—part of a broader trend of Democrats saying utterly absurd things about the economy.

Democrats have seriously underestimated the frustration that voters, unable to get the things they desire nearly instantaneously, are going to feel, as people such as Jen Psaki crack jokes about supply-chain problems, “the tragedy of the treadmill that’s delayed.” What about rising prices?

Last week, liberal punditry spent a day mocking a Texas mother of nine who groused about rising milk prices on CNN. I’m not sure if Krista Stotler had her all stats entirely correct, but I suspect most voters don’t really care to pinpoint price points. Inflation is something they feel.

Perhaps even more than the education issue that helped sink Democrats in Virginia, inflation remains the most consequential issue in politics right now. It’s hard to spin your way out of a wealth-destroying tax. There’s no one to accuse of racism. No Trump to blame. If we account for inflation, real average hourly earnings, for instance, have decreased over the past year. And all Democrats want to do is spend more money—lots of it.

Last week, Democrats, with an assist from some Republicans, approved another $1 trillion-plus infrastructure bill, even as they push through an unprecedented multitrillion-dollar reconciliation bill. All this comes after $6 trillion of deficit spending during the pandemic, which many Democrats argued wasn’t even enough.

Meanwhile, a third of recent inflation increases has been propelled by energy prices, which spiked 6.7%. Biden defenders such as Paul Krugman, who have no compunction blaming Republican governors for seasonal variances in the spread of viruses, contend that Biden has no control over gas prices. Well, the first thing Biden did was freeze new oil and gas leases and shut down future pipelines. Biden now begs OPEC to increase production and help lower worldwide gas prices, but his domestic political goals and action run contrary to this position.

Virtually every “green” plan in existence will intentionally, through mandates or bans or taxes or contrived “markets,” make fossil fuels more expensive or reduce use. Expensive gas is their goal. So how can Democrats credibly maintain they have a plan to stop rising prices?

On top of all that, Democrats continue to push for a major expansion in the welfare state during a tight labor market. It is reminiscent of their insistence that unemployment insurance be expanded even after the pandemic had ebbed. Biden’s spending plan includes programs that disincentivize work. Typically, massive “safety net” programs are instituted by Democrats during times of recession, not of growth. There are more jobs than jobseekers in the country.

It’s true that governments caused much of the demand shock we are experiencing, needlessly shutting down entire economies during the pandemic. Yet, Democrats have allowed their strident ideological wing to take over the party, aggravating these underlying trends.

Why Joe Manchin or Kyrsten Sinema (or Biden, once considered a moderate himself) would follow progressives off into this quagmire defies logic—not only economic but political logic.