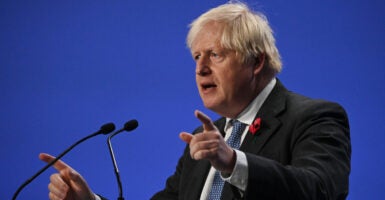 In the months and years before Britain voted to leave the European Union in 2016, Brexit’s enemies based their case overwhelmingly on economic arguments.

That is what they have always done. The reason is simple: The political case for the European Union in Britain is not popular, because it means subordinating the elected House of Commons to EU bureaucrats. So the EU’s friends in Britain talked about money instead of sovereignty.

But the economic case for the EU was also weak. Both Germany (an economic powerhouse) and Greece (an economic basket case) are part of the EU. There is nothing about being in the EU that leads automatically to prosperity.

Prosperity actually depends on two things: first, on making good policy choices, and second, on the character and work ethic of the people.

If the state doesn’t tax too much, or create too big a bureaucracy, and if the people are generally honest and hard-working, prosperity will come. If not, it won’t.

The EU has done a good job of lowering tariffs on trade inside Europe (though a free trade area would have done that without all the EU’s stifling bureaucracy).

But what the EU gives it also takes away by imposing many restraints on trade from outside Europe, often in the form of spurious health and safety regulations.

There is plenty of room for doing better on trade freedom than the EU. And now that it’s outside the EU, that is exactly what Britain is doing.

The 2021 International Trade Barrier Index found that “due to Brexit, the UK is the most improved [country in the world], moving from 8th to 4th as it implements its own tariff schedule reducing trade barriers between it and the rest of the world.”

As The Heritage Foundation’s Index of Economic Freedom has shown again and again, trade freedom is an important contributor to growth and prosperity.

The United Kingdom has done a remarkable job transitioning away from the EU on trade. It now has successor trade agreements with all of the EU’s former trade partners except Algeria, Bosnia and Herzegovina, and Montenegro.

The U.K. has concluded new free trade agreements—better than the EU’s agreements—with Japan, Australia, and New Zealand. It is moving aggressively to join the Comprehensive and Progressive Agreement for Trans-Pacific Partnership, the Pacific trading group.

The U.K. also continues to seek a free trade agreement with the U.S.—an agreement that would be good for the U.S. as well, but one that has so far been stymied by the Biden administration’s lack of a trade agenda that goes beyond words.

Nor is the U.K.’s economy obviously suffering from leaving the EU. Every nation is having difficulty dealing with COVID-19, and the supply chain shocks it has brought, but the Organization for Economic Cooperation and Development projects that the U.K. will grow 6.7% in 2021, higher than the Eurozone’s 5%.

Unfortunately, not all the choices that post-Brexit Britain has made are good. As economist Dan Mitchell recently put it, when it comes to tax and spending, “There’s not much difference between the left-wing policy of [President] Joe Biden and the (supposedly) right-wing policy of Britain’s Conservative Party.”

After all, tariffs are just taxes by another name—and if you raise taxes a lot, and then cut them a bit on trade, you’re still raising taxes by a lot. And when the government takes more money, the people have less.

But that is what freedom means—the ability to make choices, even if they are bad.

Britain’s making the right choice on trade, and the wrong choice on spending. Its friends will just have to hope it uses its freedom to choose more wisely in the future.