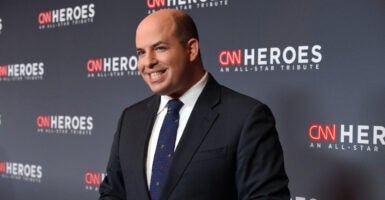 No one can be surprised that when Democrats lose elections (and almost lose elections that “weren’t supposed to be close”), the liberals blame an infernal “right-wing media machine.” That’s what Brian Stelter did in his “Reliable Sources” podcast on Nov. 4.

Stelter turned to professor Brian Rosenwald, author of “Talk Radio’s America: How an Industry Took Over a Political Party That Took Over the United States.” What listeners heard was a lot of lame theorizing and very few specifics.

To process Democrats losing the governor’s race in Virginia, Stelter quoted from leftist Washington Post blogger Greg Sargent that while Republican Glenn Youngkin campaigned on a softer rhetoric in opposing critical race theory in the schools, he capitalized on right-wing media driving a much more “visceral and hallucinogenic” version of this argument directly to the base. They apparently were hallucinating with “daily propaganda coming from the likes of Laura Ingraham.”

The argument here is that Republican candidates can sound more reasonable because they have a media “machine” that provides all the hardcore base-stoking rhetoric. Stelter said it “makes a lot of sense” to think of Fox and Newsmax as “base turnout operations.” As usual, Stelter pretends that CNN’s hardcore base-stoking rhetoric from Jim Acosta and Co. doesn’t allow the Democrats to run milder campaigns.

Stelter complained about all the “propaganda and grifting” from the right about local school board issues in Loudoun County, Virginia. He claimed there were more than 400 references to Loudoun County on Fox News in 2021. But he never mentioned the sexual assaults in high schools there as an issue.

Was that “grifting” to mention? This misses the fact that the left makes national news out of local crimes and controversies all the time. See George Floyd in Minneapolis, or Michael Brown in Ferguson.

Then, Rosenwald claimed right-wing talk radio and TV liked cultural issues because economic issues were Dullsville. They need “emotionality,” and, “when you start talking about supply chain issues and inflation and those kinds of things, that’s complicated, right? That’s economic theory; you’re going to have to understand what’s going on.” But when you talk about kids in schools, “man, that’s simple.”

Stelter sensed danger from conservatives: “Hold on. My friends at NewsBusters are going to listen to this and they’re going to say you’re saying that conservatives are dumb. This needs to be simple.”

Rosenwald claimed he wasn’t saying they were dumb, but they need radio to be “kind of like a soap opera,” because “nuance is boring.” He claimed he has talked to Republicans who said, “When we talk about the debt ceiling, or the filibuster makes us compromise, that’s boring, that’s nuance, that’s process. People don’t want to hear about that. They want to hear something big, bold, exciting, dramatic.”

How on Earth do you claim that persistent inflation and shortages of toilet paper or Christmas toys aren’t going to be dramatic political issues?

Then, these two Brians turned to the arrogant theory that liberals have nothing like Fox News or conservative talk radio on their side. They talked about how liberals listen to NPR’s “Morning Edition” instead of Sean Hannity or Mark Levin, as if that show isn’t one-sided propaganda. Oh, but that taxpayer-funded bubble sounds so calm and urbane!

This again completely misses that CNN and MSNBC are the obvious equivalent to Fox News—that they are talk television more than “news channels.” Rosenwald actually discussed how liberals could really use a billionaire like Rupert Murdoch to found something like Fox because there’s a “huge imbalance in politics and in political media.”

Who precisely sounds “hallucinogenic” on the media landscape?