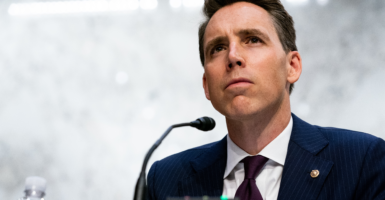 The Missouri Republican criticized the liberal label “toxic masculinity” and called for a new message to be sent to the men of America: one that focuses on the good that men can accomplish if they orient their masculinity toward the good.

>>> Listen to the full interview with Sen. Josh Hawley:

Critics had pounced on Hawley’s comments about masculinity and pornography during the National Conservatism Conference last week, mocking the senator for his discussion of virtue and suggesting that the Missouri Republican looked down on women.

But Hawley stressed Wednesday that the United States needs both strong women and strong men—and that the differences between men and women inherently complement one another.

His ideological critics don’t believe in gender, masculinity, or womanhood at all, Hawley said.

“This is why you see them attacking women’s sports,” he said. “The left wants to destroy the spaces that have traditionally been spaces for women in this society. And girls sports is a leading example.”

“The left really is attacking gender, man and woman,” Hawley continued. “And they just don’t believe in gender anymore. They believe, I guess, that all of that is optional, and all of that is to be defined however the left at present wants it to be defined.”

In his remarks at the National Conservatism Conference, Hawley had critiqued young men who idle away their time on pornography and video games, suggesting that criticism of masculinity and mahood has driven men to “withdraw into the enclave of idleness.”

Hawley reiterated these thoughts to The Daily Signal on Wednesday, pointing out that there are millions of able-bodied men out of the workforce who are not seeking employment.

“They’re not looking for work, they’re not trying to find work, they’re just sitting at home,” Hawley said. “These are able-bodied men. These are prime-age working men. That’s a problem, that’s a crisis.”

“We’ve got an epidemic of fatherlessness in the country, 18 million American kids don’t have their fathers present in their lives or in the home,” he continued. “These are genuine crises.”

But the liberal response to these societal problems, Hawley said, is to label manhood and male characteristics “toxic” and to insist that men, by being men, make America more oppressive.

“My response to that is, ‘Not true,’” Hawley told The Daily Signal. “We need to call men to be who they were made to be and to step up and be responsible.”

The Missouri Republican pointed out that the American Psychological Association has issued guidance calling traditional understandings of masculinity “psychologically harmful.” According to the American Psychological Association’s extensive August 2018 report, components of traditional masculinity include “emotional stoicism, homophobia, not showing vulnerability, self-reliance, and competitiveness.”

Hawley insisted that men shouldn’t be ashamed of their inherent manly qualities but should instead orient these qualities toward the good. He specifically cited independence, competitiveness, and assertiveness as examples of masculinity that can be positively oriented in this way, though the American Psychological Association or leftists might label these attributes problematic.

A man who is living to his full masculine potential is someone who is “responsible, somebody who serves others,” according to Hawley, who offered the example of a father or a husband.

Many of the able-bodied men out of the workforce are allowing the mothers of their children to carry the burden, Hawley continued.

The senator said that this is wrong, and that these men should be told, “‘Listen, you’re going to father kids? You’ve got some responsibility. You need to help provide for those kids. And you need to do something to support the woman in your life that you love.’”

“We need you,” Hawley said, appealing to the men of America. “We need your masculine qualities, that assertiveness and the competitiveness … We need those qualities.”

The senator emphasized that the men who do not shoulder responsibility are actively making that choice.

“As I said in the speech, you’re not going to get any excuses made from me for men,” he said. “I think responsibility is one of the most important things that God can give us. And that is true, men.”

What needs to be said, Hawley maintains, is that men have “a lot to contribute to society.”

“Those voices on the left, particularly, who want to define masculinity as inherently toxic, who want to say that if you display those masculine characteristics, you are contributing to the oppressiveness of America, that’s wrong, that’s the wrong message,” he said.