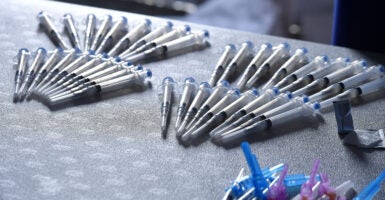 Enforcing the mandate covering 84.2 million Americans working for 164,000 businesses and other organizations might rely on employees’ snitching on bosses and colleagues. Pictured: On Feb. 2, syringes wait to be filled with Moderna’s COVID-19 vaccine at Auto Club Speedway in Fontana, California. (Photo: Will Lester/MediaNews Group/Getty Images)

If the Biden administration’s COVID-19 vaccine mandate for private employers survives legal challenges, it will include criminal prosecution for employees who lie about their vaccine status and thousands in fines for companies that don’t comply.

But enforcing the mandate covering 84.2 million Americans working for 164,000 different businesses and other organizations could pose a significant challenge and might rely on employees’ snitching on bosses and colleagues.

The designated enforcer for the vaccine mandate is the Occupational Safety and Health Administration, or OSHA, a relatively small federal agency with 1,850 inspectors, as The Wall Street Journal reports. These include federally approved state inspectors.

“It appears that OSHA is counting on workers to report on their employers and colleagues,” Badger added later in an email. “But it’s not clear that OSHA has the capacity to respond to every complaint.”

Spokespersons for the Occupational Safety and Health Administration and for the Labor Department, which includes OSHA, did not respond to phone and email inquiries from The Daily Signal.

Jim Frederick, a deputy assistant labor secretary who is acting head of OSHA, told reporters that the agency will focus “where workers need assistance to have a safe and healthy workplace,” and that need “typically comes through in the form of a complaint.”

President Joe Biden first said Sept. 9 that he had ordered up the emergency rule.

The Labor Department last week announced the rule, which will take effect Jan. 4. Under it, employers will be required to keep records of their employees’ vaccination status.

If a worker doesn’t produce proof of vaccination at work, the OSHA rule says, he or she will have to sign a statement that says: “I declare (or certify, verify, or state) that this statement about my vaccination status is true and accurate. I understand that knowingly providing false information regarding my vaccination status on this form may subject me to criminal penalties.”

After hearing of complaints, the Occupational Safety and Health Administration is expected to contact the employer and either do an on-site inspection or a remote one. OSHA may fine an employer $13,653 per worker who isn’t compliant with the mandate.

Congressional Democrats’ $1.7 trillion social spending legislation dubbed “Build Back Better” calls for boosting that fine by about five times, to $70,000 per violation.

Willful violations may lead to a maximum penalty of $136,532 per violation. The legislation would up the highest penalty to $700,000 per violation.

It could take 165 years for OSHA to inspect every covered workplace just once, Jordan Barab, who was deputy assistant OSHA secretary from 2009 to 2017, told McClatchy, asserting that “all enforcement is a major problem because it’s a tiny agency.”

However, Barab added, he thought OSHA’s vaccine rule was drafted in a way that would be a “pretty easy” standard to enforce.

About 20% to 25% of all OSHA inspections originate with a complaint, The Associated Press reported.

“There is no army of OSHA inspectors that is going to be knocking on employers’ door or even calling them,” Debbie Berkowitz, a former OSHA chief of staff, told AP. “They’re going to rely on workers and their union representatives to file complaints where the company is totally flouting the law.’’

The Occupational Safety and Health Administration already has struggled on the COVID-19 front with a lack of on-site inspections focused on protections related to the disease, according to a February report from the Department of Labor’s Office of Inspector General. OSHA had 15% more complaints and 50% fewer inspections since the start of the pandemic, the report said.

But OSHA rules that typically focus on workplace carcinogens or hazards usually are more narrowly focused on an industry or group of industries.

The 1970 Occupational Safety and Health Act allows the government to impose an emergency temporary standard that bypasses the regular, sometimes lengthy rule-making process if the government can prove a “grave danger.”

As previously reported by The Daily Signal, OSHA issued nine emergency regulations between 1971 and 1983, all more narrow in scope than the vaccine mandate.

Most of these emergency rules dealt with workplace hazards such as asbestos, carcinogens, and chemical exposure, according to the Congressional Research Service. A 1976 rule governing “diving operations” was the subject of a lawsuit by a company that works in deep-water ports.