‘Build Back Better’ Bill Would Build a Bigger, but Not Better, IRS Bureaucracy 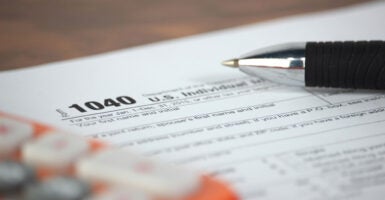 House Democrats’ massive "Build Back Better" tax-and-spending package would reward the IRS by increasing its current budget by more than 70%. (Photo: Moostocker/iStock/Getty Images Plus)

According to Gallup, only 37% of Americans view the Internal Revenue Service favorably, making it one of the least popular federal agencies.

Even among self-identified liberals, the IRS only has a 38% approval rating. A paltry 8% of Americans rate the IRS’ performance as excellent.

Little wonder the IRS is unpopular, with its history of mishandling sensitive taxpayer information and with presidential administrations from Richard Nixon to Barack Obama using the powers of the agency to target political opponents.

Over the past month, Democrats and the IRS have faced public rebuke for a proposal that would require banks and other financial institutions to report to the IRS their customers’ transaction information, possibly even for accounts as small as $600.

Yet, House Democrats’ massive tax-and-spending package would reward the unpopular tax-collecting agency by increasing its current budget by more than 70%. Over the next 10 years, the bill would add $88 billion of new funding for the IRS, including $45 billion dedicated to enforcement, $27 billion for operations support, $5 billion for new business systems, $4 billion to administer green energy initiatives, and $4 billion to administer child tax credits.

Meanwhile, it dedicates less than $2 billion for taxpayer services.

Between the huge sums aimed directly at enforcement activities and operations support, expect a large majority of the $88 billion of new IRS funding to directly or indirectly support things like asset monitoring, audits, taxpayer investigations, and legal actions against taxpayers.

By ballooning the size of the IRS, left-wing lawmakers hope to increase revenues by more than they increase costs. The Wharton School of Business at the University of Pennsylvania, the Committee for a Responsible Federal Budget, and the Tax Foundation estimated the net budget effect of the IRS enforcement provisions would be $190 billion, $125 billion, and $120 billion, respectively.

When the Congressional Budget Office scored a prior version of the bill, it estimated similar IRS enforcement provisions would net $120 billion.

In other words, under the left’s plan, for each additional $1 the IRS receives for enforcement, it may extract an additional $3 from American taxpayers. That’s extremely inefficient.

Imagine if the IRS spent $1 for each $3 of revenue it currently collects. The IRS would consume one-third of the federal budget, well over $1 trillion per year.

By contrast, the IRS now claims it spends, on average, just over $1 per $300 it collects. On the margins, the new enforcement dollars in the House plan would be spent about 99% less efficiently than the IRS’ current budget.

Presumably, the IRS would attract most of the estimated 87,000 new IRS employees from elsewhere in the labor force. It’s hard to justify draining other employers’ talent pool for such bureaucratic waste.

Perversely, if the IRS is simply able to increase collections by enough to offset its own costs, the agency refers to it as a positive “return on investment,” completely ignoring the burden imposed on taxpayers and the economy.

If the goal is to create a bigger government bureaucracy, such language makes sense. However, given the IRS’ mission statement involves providing America’s taxpayers top-quality service, it should not ignore the harm done to taxpayers.

According to government estimates, U.S. taxpayers spend more than 6 billion hours a year complying with IRS information requirements. Under the Democrats’ current proposal, that number would swell.

The bloated enforcement apparatus of the IRS would require Americans to deal with more audits, keep even more comprehensive records, spend more on accounting fees, and may make taxpayers hesitant to claim legitimate deductions and credits for fear of triggering an audit.

In an analysis of a similar proposal in the president’s 2022 budget, the Congressional Budget Office stated that audit rates would increase for all taxpayers, not just higher-income taxpayers. The analysis also noted that some audits would likely be directed at taxpayers who are compliant and owe no additional tax.

Part of the reason the House plan requires a sharp expansion of the IRS budget is that the bill is riddled with complicated new tax rules, such as the creation and expansion of minimum-tax regimes.

Under the absurd tax plan, some businesses would have to calculate their tax burden in three different ways: based on financial statement income, based on an alternative calculation that disallows certain international deductions, and based on the traditional corporate income tax system.

Such legislative changes would only further complicate an already convoluted tax system. The United States currently has 6,859 pages of tax law, known as the Internal Revenue Code. In addition, IRS regulations weigh in at 14,312 pages, not to mention some 48,895 pages of official guidance the IRS has issued since 2000.

All told, that’s more than 70,000 pages of rules for taxpayers to keep straight. Taxpayers should, of course, do their best to comply with tax rules, but when taxpayers do “underpay” their taxes, it’s typically not a blatant attempt to cheat the system. More often, the tax rules are simply unclear or ambiguous.

The House plan, like other tax legislation, would direct the IRS (or the Treasury Department more broadly) to issue regulations and guidelines determining how the new tax law is applied.

Sometimes, it takes the IRS years to promulgate such rules. Disputes over tax law sometimes take decades to play out in court. That uncertainty often forces taxpayers to take an educated guess about proper interpretation of tax rules.

Generally, legislators should be wary of giving the IRS or any other agency too much rule-making authority. The Constitution gives the power of the purse to Congress, but all too often, Congress hands that power over to the executive branch by allowing the Treasury Department to determine consequential tax rules.

For example, Congress wrote 191 words of tax law in the Internal Revenue Code regarding transfer pricing (tax rules for the pricing of transactions occurring within a multinational firm). However, the IRS-issued regulations governing transfer pricing—§1.482-1 through §1.482-9—consist of more than 130,000 words.

Such delegation of rule-making power to the president’s Treasury Department has real consequences.

President Joe Biden recently left a G-20 summit at which he and other world leaders agreed to major changes in international tax rules. Two chief goals of the world leaders were to ensure that countries don’t set taxes too low and to agree to a framework in which large international corporations—chiefly U.S. technology companies—would pay taxes in countries where they have no or little physical presence.

Such agreements generally require new legislation, but if the Treasury Department’s rule-making authority in a section of the tax code is too broad, the department may attempt to circumvent that process.

For example, the Obama administration’s Treasury Department issued regulations mandating that businesses comply with country-by-country reporting standards from the Organization for Economic Cooperation and Development, requiring the sharing of sensitive taxpayer information with foreign tax authorities.

Rather than simplifying the tax system or limiting the IRS’ regulatory authority, the bloated, bureaucratic “Build Back Better” plan does the opposite. It further complicates the tax code and expands the IRS’ ability to crack down on the very taxpayers that the agency supposedly serves.