With So-Called Build Back Better Bill, Socialist Health Care Agenda Is Closer Than You Think 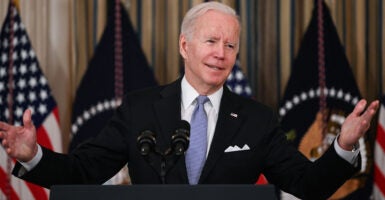 President Joe Biden, seen here Nov. 6 hailing the passage by Congress of his infrastructure bill, now has his sights set on a massive tax-and-spending bill that includes, among many other bad ideas, a plan to push more people into Medicaid-like plans through the Obamacare exchanges. (Photo: Roberto Schmidt/AFP/Getty Images)

Despite claims that negotiations among Democrats are leading to a smaller and less radical proposal, the latest version of the “Build Back Better” tax-and-spend bill still represents a massive government expansion in health care.

As a matter of fact, almost all of the original health care provisions in the $3.5 trillion package remain in place and a full-blown government takeover remains in sight.

The “new” items in the bill aren’t really “new.” They are the same old policies masquerading as something “new,” and they don’t make the bill any more appealing.

The bill replaces plans to create a new government-run, “public” option with a plan to push more people into Medicaid-like plans through the Obamacare exchanges. It replaces plans to add dental, vision, and hearing benefits to traditional Medicare with a plan to offer only hearing benefits that are already available outside of traditional Medicare. And it replaces plans to have the government set prescription drug prices based on prices set by other countries with plans for the secretary of health and human services to set price controls through so-called negotiations.

The consequences of the legislation—intended or unintended—remain the same. The package of policies will drive out private coverage options, undermine the existing safety net, and leave taxpayers holding the bag.

Policies such as lifting income limits on qualifying for subsidies in the exchange or to enroll in existing safety-net programs, such as Medicaid, and imposing new mandates on the states and restricting their ability to manage the programs based on the needs of their residents, and not the federal government, will weaken state flexibility and overstretch an already overburdened program.

Budget gimmicks, by either delaying the start dates or abruptly cutting off benefits, as would be done with expansion of the Obamacare subsidies, manipulates the true cost of the proposal.

Furthermore, arbitrary government price controls, as would be done with prescription drugs, or capping premiums, means people will get less access and less coverage or someone (i.e., taxpayers) will be left to fill in the gap.

All in all, the bill continues to paper over the problems of Obamacare with more money and more regulation instead of reforms that empower patients and families, not the government.