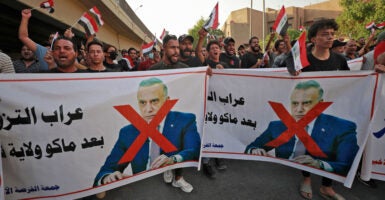 Iraqi demonstrators, including hundreds of supporters of pro-Iran groups, hoist banners Nov. 5 near an entrance to the Green Zone in Baghdad against Iraqi Prime Minister Mustafa Al-Kadhimi at a protest contesting October election results. Two days later, on Nov. 7, Kadhimi was the target of an assassination attempt said to have been plotted by pro-Iran militias in Iraq. (Photo: Ahmad Al-Rubaye/AFP/Getty Images)

Iraqi Prime Minister Mustafa al-Kadhimi survived an armed drone attack Sunday on his official residence in Baghdad that wounded seven of his guards.

The attack, which involved Iranian-made drones, was an assassination attempt that sends a message of intimidation to Kadhimi and any other Iraqis who pose a challenge to the influence of Iran and its proxy militias inside Iraq.

Although no group has claimed responsibility for the attack, Iraqi security officials blamed Iran-backed Iraqi militias, which increasingly have challenged the authority of Iraq’s weak coalition government. They claimed that Kataib Hezbollah (“Brigades of the Party of God”) and Asaib Ahl al-Haq (“League of the Righteous”), two of Iran’s most powerful Iraqi surrogates, carried out the attack.

Those two Iraqi Shia militias also have launched many drone and rocket attacks on U.S. military personnel supporting the Iraqi armed forces. In January 2020, the United States retaliated for repeated attacks on American troops in Iraq by launching a drone strike that killed the commander of Kataib Hezbollah and his Iranian master, Gen. Qassem Soleimani, the leader of the elite Quds Force of the Islamic Revolutionary Guard Corps.

The Quds Force, which trains and equips Iran’s network of regional proxy groups, has transferred thousands of drones, rockets, and missiles to Iran-backed groups in Iraq, Lebanon, Syria, Gaza, and Yemen.

The drone strike against the prime minister’s residence is undoubtedly linked to rising political tensions inside Iraq. Kadhimi, a former journalist serving as Iraq’s intelligence chief before he was appointed prime minister in May 2020, has clashed repeatedly with pro-Iranian militias whose influence he has sought to reduce.

Although Kadhimi has made little progress in whittling down the power of the militias, Iran’s militia proxies were stung by their disastrous showing in Iraq’s Oct. 10 elections, in which they lost about two-thirds of their seats in Iraq’s parliament.

Although their political coalition once enjoyed considerable Shia political support due to the militias’ role in defeating ISIS, many former supporters turned against the militias because of their role in fueling corruption and shooting peaceful protesters who sought to reform Iraq’s government.

The attack on Kadhimi came two days after clashes in Baghdad between government forces and supporters of the Iran-backed militias, who were violently protesting the election results. There was an outburst of rock-throwing and an exchange of gunfire that killed one protester and injured scores of others, as well as dozens of security personnel.

Qais Khazali, the leader of Asaib Ahl al-Haq, accused Kadhimi of ordering the use of live ammunition against the protesters and said the prime minister should “pay the price” for the killing.

Iran moved quickly to intervene in the growing crisis. Brig. Gen. Esmail Ghaani, who succeeded Soleimani as head of Iran’s Quds Force, arrived in Baghdad to meet with Kadhimi within hours of the drone strike on Sunday.

Although it’s not known what he told Kadhimi—beyond denying Iran was responsible for the attack—it is likely that he cautioned Kadhimi against taking action against Iran’s proxies. Ghaani may even have offered Kadhimi “protection” against further attacks if he was cooperative and stopped resisting Iranian efforts to dominate Iraq.

While Ghaani lacks the intimidating aura of Soleimani, as well as his unchallenged control over Iran-aligned Shia militias, Ghaani’s sudden appearance signaled Iran’s strong interest in maintaining its influence in Iraq.

The United States, in contrast, supported Kadhimi with a phone call from Secretary of State Antony Blinken. Although expressing American diplomatic and political support is important, it’s not sufficient to offset the lethal threats posed by Iran and its proxy militias.

Those threats—to Iraqis as well as to the 2,500 U.S. troops supporting the Iraqi government—will only get worse unless Iran is forced to pay a heavy price for its meddling in Iraq.

Unfortunately, the Biden administration, fixated on reviving nuclear talks with Iran, is likely to turn a blind eye to Iran’s shadow war against Kadhimi’s government, just as it has played down the continuing attacks by Iran-backed Iraqi militias against American troops.

This complacent response will only embolden Iran and lead it to launch more proxy attacks in Iraq and elsewhere.