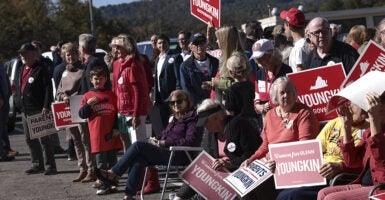 From the White House to school boards across America, voters on Tuesday screamed at Democrats: “No!” to reckless spending, meddlesome bureaucrats, bear hugs for criminals, racial fetishism in classrooms and beyond, soaring energy prices, a monthly average of 179,779 illegal aliens invading the southern “border” on President Joe Biden’s watch, and much more.

In New Jersey, Republican Jack Ciattarelli led Democrat Gov. Phil Murphy by a breathtaking 61 votes early Wednesday morning. The race stands at Ciattarelli 50.8% to Murphy’s 48.5%, with the Republican not conceding amid ballots yet uncounted and reported anomalies in Bergen County. Whatever happens, a former GOP state assemblyman was not supposed to get this close to a Democrat governor of a state that Biden won by 16 points.

Statewide, liberal proposals to include illegal aliens in redistricting, inflict same-day voter registration, and expand no-excuse absentee voting all went up in smoke.

In Minneapolis, birthplace of the “defund the police” movement, one of the left’s ugliest babies was strangled in its crib. A ballot measure to “reimagine” the 70% Democrat city’s police force into a touchy-feely Department of Public Safety crashed and burned—57% “no,” 43% “yes.”

If Democrats were smart, they would remember that HillaryCare and other leftist excesses cost them the House in 1994. President Bill Clinton “triangulated,” steered sharply toward the center, and helped House Speaker Newt Gingrich, R-Ga., reduce capital gains taxes and reform welfare.

Alas, too many Democrats are dumb. House Speaker Nancy Pelosi, D-Calif., appears hellbent on pushing Biden’s $1.75 trillion (per Penn Wharton: $3.98 trillion) Build Back Better tax-hike, welfare, and red-tape colossus. She and other socialists argue that Democrats got clocked Tuesday for not being leftist enough. Will Pelosi and her party wise up or will they keep torturing the American people?

Stumping for McAuliffe in Norfolk, Vice President Kamala Harris said: “What happens in Virginia will, in large part, determine what happens in 2022, 2024, and on.” It would behoove Democrats to reimagine last week’s battle cry as a cautionary tale.