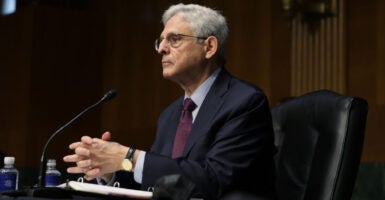 Attorney General Merrick Garland said he would use his National Security Division—the unit within the Department of Justice that goes after jihadists—to crack down on parents protesting COVID-19 mandates and racist indoctrination in public schools. Pictured: Garland testifies at a Senate Judiciary Committee hearing on Oct. 27 about his memo directing the FBI to look into parents who speak out at local school board meetings. (Photo: Tasos Katopodis-Pool/Getty Images)

Why did Attorney General Merrick Garland form a law enforcement task force and threaten to use the FBI and several other divisions of the Department of Justice against parents protesting COVID-19 mandates and racist indoctrination in public schools?

At a recent Senate oversight hearing, Garland insisted it was news reports of violence at school board meetings—and not simply a letter from two officials at the National School Boards Association—that prompted him to do it.

The letter smeared protesting parents as potential domestic terrorists. And yes, Garland said he would use his National Security Division—the unit within the Department of Justice that goes after jihadists—to crack down on parents.

But where are the news reports supposedly supporting the terrorism accusation? Surprisingly, the Justice Department didn’t produce them.

Garland issued his memo tasking the FBI and other Department of Justice divisions with looking into the parental protests only five days after receiving the National School Boards Association letter—even though the letter itself was short on facts backing up its sensational charges.

Indeed, by the time the Senate hearing convened, the National School Boards Association board had already repudiated its letter, leaving Garland to insist that it was really news reports that made him act.

Well then, Garland, where are those reports?

The National School Boards Association cited none. The best it could muster was to note that “during two separate school board meetings in Michigan, an individual yelled a Nazi salute in protest to masking requirements, and another individual prompted the board to call a recess because of opposition to critical race theory.”

The last time we checked, parents still retain the right to free speech, prompting a recess in a local government meeting is not considered domestic terrorism. As another of our colleagues has pointed out, “There is no conceivable basis for federal law enforcement actions against these parents.”

You might expect the media to do their job and demand that the administration justify its behavior by producing actual evidence of widespread violence by irate parents. If so, you’d be disappointed.

Indeed, much of the coverage of Garland’s testimony blithely repeated his unsubstantiated charges. Garland had acted due to “a rising tide of threats against school staff,” intoned the always-woke NPR.

The New York Times report acknowledged that “in the memo, Mr. Garland did not detail any specific threats of violence or offer reasons for the increase in harassment and threats.” However, it then proceeded to try to support Garland’s contention with this hyperlink-heavy paragraph:

But news accounts over the past year have detailed physical fights, arrests, charges of disorderly conduct and threats made against board members, faculty and administrators stemming from arguments over topics that have animated the right, such as mask mandates, gender issues and curriculum that deals with racism.

Any reader who bothered to open the hyperlinks, though, would find the cases discussed to be risible. In no way do they constitute a justification for federal involvement.

In stark contrast to these minor incidents stand last year’s hundreds of riots, which caused between $1 and $2 billion in property damage—the costliest civil disturbance in U.S. history.

The Black Lives Matter organizations and Antifa groups were the prime movers in those riots, and one could correctly characterize their actions as a “disturbing hike in harassment, intimation, and threats of violence,” the same language Garland used to describe the actions of parents against schools.

The homicide rate rose by a record 30% in 2020, a spike linked to the disturbances by many observers. Will Garland direct the FBI and the Criminal, Civil Rights, and National Security divisions to investigate and prosecute that violence?

The Heritage Foundation, where we both work, has already called for an investigation into every aspect of this misguided and abusive action by the Department of Justice, so that Americans can be reassured that a beleaguered administration, fearing consequences at the ballot box from an enraged electorate, did not attempt to use its law enforcement power to suppress the constitutionally protected activity of parents. (The Daily Signal is the multimedia news outlet of The Heritage Foundation.)

Now we ask for the evidence that Garland cited to justify his mobilizing the overwhelming forces of the federal government against parents justifiably concerned about the education of their children.