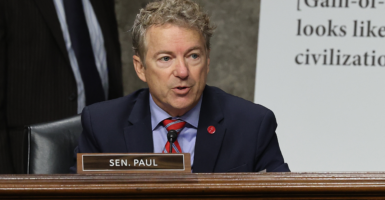 Sen. Rand Paul assailed Dr. Anthony Fauci during a committee hearing Thursday, calling on the head of the National Institute of Allergy and Infectious Diseases to resign from his position after Fauci refused to admit that his agency funded gain-of-function research.

“Until you accept responsibility, we’re not going to get anywhere close to trying to prevent another lab leak of this dangerous sort of experiment,” the Kentucky Republican told Fauci at a hearing of the Senate Health, Education, Labor, & Pensions Committee. “You won’t admit that it’s dangerous, and for that lack of judgment, I think it’s time that you resign.”

National Institutes of Health Deputy Director Lawrence Tabak admitted in an Oct. 20 letter that his agency funded gain-of-function research in China. The letter said that the nonprofit EcoHealth Alliance failed to immediately tell the institute that it had made dangerous, lab-generated chimeric coronaviruses between June 2018 and May 2019.

Paul drew Fauci’s attention to that letter and grilled the head of the National Institute of Allergy and Infectious Diseases on gain-of-function research, a process in which researchers may stitch viruses together to make a lab-made “chimeric” virus for the purpose of studying a response.

“So,” Paul asked Fauci, “when EcoHealth Alliance took the virus SHC-014 and combined it with WIV1 and caused a recombinant virus that doesn’t exist in nature and made mice sicker—mice with humanized cells—you’re saying that’s not gain-of-function?”

Fauci did not give a yes or no answer, but began to say, “According to the framework and guidelines … ,” before Paul interrupted him.

Fauci repeatedly emphasized that he disagreed with Paul’s characterizations of his comments and said that the research funded at China’s Wuhan Institute of Virology was not related to gain-of-function research.

“I disagree with so many of the things that you’ve said,” he told the Kentucky lawmaker.

“I can get back to that in a moment if we have time,” Fauci said.

The senator said that Fauci is “defining away” gain-of-function research, “saying it doesn’t exist,”

“This is terrible,” Paul said. “You’re completely trying to escape the idea that we should do something about trying to prevent a pandemic from leaking from a lab.”

Until you admit it is risky, we won’t get anywhere. You have to admit this research was risky. The [National Institutes of Health] has now rebuked them. Your own agency has rebuked them. The thing is, you are still unwilling to admit they gained in function when they say they became sicker. They gained in lethality. It’s a new virus. That’s not gain-of-function?

“According to the definition that is currently operable,” Fauci responded.

“No. 2, you said the overwhelming amount of evidence indicates that [it is] a lab leak,” he continued. “I believe most card-carrying … molecular virologists would disagree with you; that it is much more likely, even though we leave open all possibilities, it is much more likely that this was a natural occurrence.”

“And third,” Fauci added, following an interruption from Paul, “you made a statement just a moment ago that is completely incorrect where you say we continue to support research at the Wuhan Institute of Virology.”

Paul fired back, again interrupting Fauci, “In your committee a month ago, you said you still trust the Chinese scientists, and you still support the research over there.”

“You’ve had your time,” Murray continued, but Paul told her, “If he is going to be dishonest, he ought to be challenged.”

“Senator Paul, we will allow Dr. Fauci to respond after you’ve given accusations like that,” she said.

In May 2016, The Daily Caller News Foundation reported that two of Fauci’s subordinates flagged that U.S. taxpayer dollars might be being used to fund gain-of-function experiments at the Wuhan Institute of Virology. The Fauci staffers dropped their concerns after EcoHealth Alliance downplayed their concerns, according to the publication.