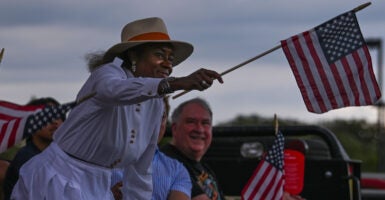 Winsome Sears, the winner of Virginia's race for lieutenant governor, waves a flag June 30 in opposition to the teaching of critical race theory in Loudoun County Public Schools during an event in Ashburn, Virginia. (Photo: Michael Blackshire/The Washington Post/Getty Images)

Republican Winsome Sears became the first black woman to be elected statewide in Virginia, narrowly winning the lieutenant governor’s race Tuesday as part of a Republican sweep of state offices.

The polls in Virginia closed at 7 p.m., and the Decision Desk HQ website called the lieutenant governor’s race for Sears at 8:43 p.m.

In May, Sears derided critical race theory, which along with other education issues became a key topic in the Virginia elections.

“It’s going to be detrimental to our schools and not what we want,” Sears said of critical race theory in an interview on “Fox & Friends,” adding: “It supposedly is to help someone who looks like me and I’m sick of it; I’m sick of being used by the Democrats, and so are many people who look like me.”

In early September, Sears told Newsmax she “would support” a heartbeat law such as Texas’ new law, which bans abortions at about 6 weeks into a pregnancy, when a heartbeat is detectable.

Her campaign later told The Hill: “While Winsome personally supports protecting life and the most vulnerable, as a former legislator herself she also recognizes that Virginia is very different from Texas, and that legislation could never have the votes to pass the Virginia General Assembly.”

Sears will replace Lt. Gov. Justin Fairfax, a Democrat who is also black.

Her decisive victory comes despite a fundraising disadvantage. As of Oct. 21, Ayala led in fundraising with $6.4 million to Sears’ $2.5 million, according to Ballotpedia.

In 2002, Sears, a former Marine, became the first Republican elected from a majority-black legislative district since 1865. She remains the only black Republican woman to serve in the Virginia House of Delegates.

As lieutenant governor, she will be president of the state Senate.

Sears, 57, is a former vice president of the Virginia Board of Education. She has held posts on advisory boards in federal agencies, co-chaired the African American Committee at the U.S. Census Bureau, and served on a committee of female veterans that advises the secretary of the U.S. Department of Veterans Affairs.

Sears previously led a prison ministry and was a director of a women’s homeless shelter for the Salvation Army.

Born in Kingston, Jamaica, she is a 1992 graduate of Old Dominion University and completed a master’s degree at Regent University in 2003.