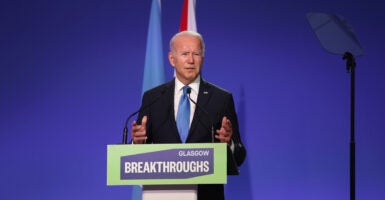 President Joe Biden returned from Scotland early on Wednesday after delivering his climate change agenda at the COP26 climate change summit. From energy policy to the supposed costs imposed by climate change, the president’s remarks covered a range of topics.

To better understand the president’s climate change agenda, The Daily Signal spoke with Katie Tubb, senior policy analyst for energy and environmental issues in the Thomas A. Roe Institute for Economic Policy Studies at The Heritage Foundation, to unpack Biden’s remarks.

The Daily Signal: President Joe Biden said in his remarks at COP26, “Climate change is already ravaging the world. … It’s destroying people’s lives and livelihoods and doing it every single day. … It’s costing our nations trillions of dollars.” Is that accurate?

Katie Tubb: Context is helpful. Since 1980, property damage from weather disasters has increased in the U.S., but this hides that there are more people, who are building more valuable real estate, and filling it with more valuable stuff. It also doesn’t answer whether things are getting worse.

The United Nations’ Intergovernmental Panel on Climate Change’s latest assessment of climate science reports no discernible global trends for hurricanes, winter storms, floods, tornadoes, or thunderstorms, while it did report trends in heat waves, heavy precipitation, and some kinds of drought. And as a percent of global gross domestic product, damages from natural disasters have actually declined since 1990.

Cost isn’t inconsequential, but at the end of the day, what matters in a disaster is peoples’ lives. Deaths from climate-related disasters have decreased 96% over the last century, which I think has everything to do with widespread economic freedom, growth, and access to energy to help us be more resilient in the age-old battle against natural disaster. In other words, poverty makes us more vulnerable to the whims of climate.

Certainly our perception of natural disasters around the world and the human suffering they inflict has increased with a 24/7 news cycle. And we all know that crisis is currency for politicians and the media. Often the goal of statements like the president’s is to alarm people and create urgency for action, as if the time where thinking and debate was over—to use an oversimplified discussion of science as a bludgeon to demand political conformity and a shield for avoiding accountability for the costs of policy choices.

I think there’s a lot more debate yet to be had about climate science, the nature and pace of warming, and the modeling and tools we use to understand our incredibly complex climate. But at a minimum, there ought to be robust debate over climate policies. That’s exactly what the left wants to shut down by leveraging urgency.

The Daily Signal: Biden said that the high energy prices we are seeing is a reason to recommit to “clean energy goals,” so we aren’t “overly reliant on one source of power to power our economies and our communities.” Are we seeing high energy prices because we haven’t committed to clean energy?

Tubb: California is an instructive example—no one would accuse California of being lukewarm on aggressive climate policy. The state is banning the sale of gasoline-powered cars and even lawn equipment.

I don’t think it’s played out well for them. They have some of the highest gasoline prices in the country. They are the largest importer of electricity in the U.S. and their grid reliability monitor has been firing warning shots for several years now that reliability is strained. According to the Energy Information Administration, between 2018 and 2019, average energy costs fell 5% and Americans’ per capita energy costs decreased—in every state except California.

It’s also amazing to me how those arguments are recycled over the years to justify central planning.

In the 1970s, the oil crisis was used to justify disastrous government price controls. In the mid-2000s, a projected looming energy supply crisis was used to justify cronyist energy subsidies and central planning policies like the Renewable Fuel Standard—both of which have failed. President Barack Obama told Americans we couldn’t drill our way to lower gasoline prices, and now Biden is telling Americans they shall not—all to justify command and control energy policy.

The Biden administration’s climate policy seeks to completely and rapidly transform the energy sector (and with it the American economy) into its own image, and in ways that have huge negative implications for both the size and scope of the federal government in Americans’ lives. I think we’re seeing some of the reverberations now.

Tubb: I think Biden is wondering if it’s reasonable too! Ironically, the president has made several calls to oil-producing nations to increase production in the face of increasing energy prices. To adapt an idea from political scientist Roger Pielke Jr. and journalist Robert Bryce, Biden is having to come to terms with the “iron law of energy”—people will do whatever it takes to get the energy they need.

It’s also helpful to think about what those aspirations entail. In the U.S., we’re so used to having reliable energy that we take it for granted when we walk into a temperature-controlled kitchen, turn the lights on, and pour cold, unspoiled milk into a bowl of cereal. We don’t think twice when we turn our computers on to host a video conference or write a term paper.

Americans get 79% of their total energy needs—heat, power, transportation—from conventional fuels like oil, natural gas, and coal. A full 90% of our transportation needs are met by petroleum. It’s very similar around the world, and global demand for this energy isn’t shrinking.

To peel back another layer, oil and natural gas are critical feedstocks for making thousands of products that improve Americans’ lives—pharmaceuticals and hospital equipment, food safety packaging, fertilizer, cosmetics, and sports equipment, even the contact lenses I’m wearing.

But these are the energy resources the Biden administration is targeting through regulations by almost every angle it can to achieve the president’s objective. You never know what turn innovation can take, but call me very skeptical on the reasonable part.

Perhaps more important is to ask what these cuts accomplish, getting to your question of is this a “laudable” goal. It sounds like it’s accomplishing a lot—a gigaton by 2030—but what Biden and his administration are not telling Americans is what kind of environmental impact they can expect to see.

Biden’s goal will moderate global temperatures by 0.04 Celsius by the end of the century, according to The Heritage Foundation’s modeling, using the assumptions the Environmental Protection Agency and Intergovernmental Panel on Climate Change make about future warming. Special Climate Envoy John Kerry even acknowledges eliminating all U.S. greenhouse emissions will have no meaningful impact on global temperatures.

And back in the Obama administration, then-EPA Administrator Gina McCarthy (who is now the White House national climate adviser orchestrating the administration’s climate policies) could not tell Congress how the Clean Power Plan would impact global temperatures—only that it was “an investment opportunity.”

As I see it, it’s not reasonable or laudable to push policies that have real costs to American families and businesses and further erode the American system of limited, representative government for no environmental benefit.

The Daily Signal: Secondly, are the ways Biden proposes to reduce emissions the right way to go (tax credits for things such as installing solar panels, increasing credits for electric vehicles, and adding incentives for solar and wind energy manufacturers)?

Tubb: These aren’t climate policies—this is old-fashioned cronyism through the tax code. Right now, the Biden administration’s allies in Congress are trying to push hundreds of billions in tax subsidies for green energy. To be clear—the problem isn’t green energy technologies, which should be allowed to compete as some of the many options Americans have for energy. The problem is cronyist policies that are patently unfair and burden the taxpayer.

But another concern is the perhaps less obvious legislation by way of regulation being done across the Biden administration in the name of climate policy. It’s not an overstatement to say that regulatory actions under the Biden administration are seeking to reengineer the American economic system away from free enterprise (queue the Securities and Exchange Commission and the Department of Labor) and to crush federalism by exporting California’s climate policy experiment through federal regulatory standards (queue the EPA, Department of Energy, Department of Interior).

For example, did you know that the Department of Energy is currently updating regulatory standards on the energy efficiency of refrigerators to reduce a modicum of greenhouse gases? And not just that, but also trailer homes, kitchen cooking ranges and ovens, washing machines and dryers, water heaters, lightbulbs, ceiling fans, dehumidifiers, dishwashers, microwaves, and furnaces. These policies directly impact the lives of Americans.

The Daily Signal: How can the U.S. better pursue a cleaner, healthier environment?

Tubb: While I have little trust in the federal government to manage a grand “energy transition,” I have a lot of hope in the diverse abilities of people to creatively solve problems, innovate, adapt, and improve the world around them.

History bears this out. One of The Heritage Foundation’s seminal products is the Index of Economic Freedom, and data from the index over decades clearly show that economic freedom goes hand-in-hand with economic growth, which is essential to environmental stewardship.

One manifestation of that is what I mentioned earlier about climate-related deaths plummeting over the last century. Another is innovation in hydraulic fracking that created an energy boom almost no one saw coming and was in no one’s projections about the future energy prices and supply. Yet it’s mostly due to hydraulic fracking making natural gas abundant and affordable that carbon dioxide emissions from the electricity sector have fallen 33% since 2005.

So the question that local, state, and federal policymakers should be asking is, how do we improve economic freedom in the U.S. and around the world? At the top of the list should be eliminating supposed climate policies that make people poorer and have no environmental impact.

But there are so many ways to improve economic freedom in the U.S. Just a quick example since I’ve brought up tax policy—instead of tax credits for politically preferred energy, Congress should eliminate energy subsidies across the board and pursue pro-growth policies like full and immediate expensing of research and development. Also, right up there should be streamlining permitting and regulatory reviews and eliminating trade barriers.

I think an environmentally resilient future is one in which our country’s finances are in good order, Americans aren’t crushed under the burden of federal debt and regulation, innovators have freedom from cronyism to develop their ideas and export those to the world. The choice between a healthy environment and economic growth is a false one, and instead these two are mutually achievable.