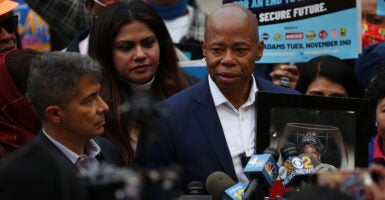 Eric Adams, seen here speaking to the news media after casting his vote Tuesday at Public School 81 in the Brooklyn borough of New York City, was elected mayor of the Big Apple on Tuesday. (Photo: Tayfun Coskun/Anadolu Agency/Getty Images)

In a campaign featuring two candidates with backgrounds in law enforcement, Democrat Eric Adams defeated Republican Curtis Sliwa on Tuesday to become the next mayor of New York City.

The Associated Press called the race for Adams at 9:20 p.m., shortly after the polls closed.

With 62% of the vote counted as of 10:42 p.m., Adams held a commanding lead with 66% of the vote to Sliwa’s 28%, with four other candidates and write-ins garnering a combined total of 6%, according to New York City’s WABC-TV Channel 7.

Adams, a former New York Police Department captain, will be just the second black mayor in the history of the nation’s largest city. The first, David Dinkins, was elected in 1989, but lost his reelection bid to Republican Rudy Giuliani in 1993.

Sliwa, who in 1979 founded the Guardian Angels, an unarmed crime-fighting group, was a popular and well-known figure in the city, but inexperienced as a political candidate.

Adams ran as a moderate pro-law enforcement candidate after eight years of the far-left policies by Mayor Bill de Blasio, a fellow Democrat, who often has been seen as hostile to police.

Adams strongly opposes defunding the police and supports bringing back some form of stop-and-frisk, which he calls “stop, question, and frisk.” The stop-and-frisk policy backed by the mayoral administrations of Giuliani and Michael Bloomberg was credited with curbing crime, but de Blasio’s administration did away with it, claiming it was discriminatory.

Adams frequently said during the campaign, “The prerequisite to prosperity is public safety.”

Still, Adams has also pushed for police reforms and advocates firing police officers who abuse their power. He made appeals to the New York business community and described himself as a “pragmatic moderate,” although he also described himself as the “original progressive” to appease his party’s left flank.

Sliwa, who conceded the race at about 9:30 p.m., congratulated Adams, while attacking de Blasio.

“I’ve known Eric Adams for 40 years. We’ve been friends for most of that time. Up until recently. It got quite heated, quite vitriolic, but I will tell you this: In the aftermath of Bill de Blasio, who has singlehandedly destroyed the city that we love, I am pledging my support to the new mayor, Eric Adams, because we’re all going to have to coalesce together in harmony and solidarity if we’re going to save the city that we love,” Sliwa said, according to WABC-TV.

Adams is also a former state senator, having served from 2006 through 2014 before getting elected as borough president of Brooklyn in 2013. The Adams campaign pitched the mayor-elect’s personal story of a dyslexic child of a single mother who was himself arrested before going into law enforcement and later politics.

Adams was a heavy favorite to win the Tuesday general election in a city where Democrats outnumber Republicans 7-1. But his victory in the June Democratic primary over more left-leaning candidates signaled that city voters sought a departure from de Blasio’s policies.

The New York City primaries were notable for being the city’s first ranked-choice voting primary, allowing voters to choose multiple candidates by rank, with several rounds of vote-counting to determine the winner. The general election was held under traditional voting rules.

After a 3.4% early-voting turnout, the two candidates campaigned throughout the city, hoping to turn out voters on Election Day.

Sliwa ran heavily against the de Blasio COVID-19 vaccine mandates for municipal employees that formally went into effect on Monday, leading to the suspension of about 10,000 city workers without pay—including police officers and firefighters, the New York Daily News reported.

Sliwa argued that suspending workers posed a bigger threat to public safety than the unvaccinated, and pledged to reinstate the workers with back pay and scrap the mandate.

Adams hedged, saying he backed the de Blasio mandate, but said the outgoing mayor did not show enough respect to municipal employee unions.

Sliwa, also known for being an animal lover with more than a dozen cats, also campaigned on ensuring the city has only no-kill shelters. He further promised he would take his trademark red beret off if elected, as the Guardian Angels founder has been identified with his head gear. Sliwa has described himself as a “never Trump” Republican and said it’s difficult to get Republicans to vote in New York City.

Adams will take office on Jan. 1.