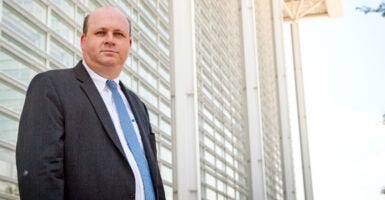 Mark Elias’ involvement in contested elections spans the improbable Senate victory of comedian Al Franken in 2008 to litigation both before and after the 2020 election.  Pictured: Elias outside the Sandra Day O'Connor U.S. Courthouse in Phoenix on Aug. 3, 2016, after a hearing on his lawsuit over Arizona voting law. (Photo: David Jolkovski/The Washington Post/Getty Images)

Lawyer Marc Elias has in some ways been the Democrats’ Forrest Gump of election controversies, showing up in the most high profile election cases of the past two decades.

Elias’ involvement spans the improbable Senate victory of comedian Al Franken in 2008 to litigation both before and after the 2020 election.

The lawyer’s reputation may have been the reason a spokesperson for Virginia gubernatorial candidate Terry McAuliffe suggested the campaign “try to kill” a Fox News story that the campaign paid $53,000 to hire Elias, said Hans von Spakovsky, a senior legal fellow at The Heritage Foundation.

“I would suspect the reason they wanted to kill the story is that Marc Elias’ clients are often candidates that lost elections, and no candidate wants to give the impression they are worried about losing,” von Spakovsky told The Daily Signal.

McAuliffe, a Democrat who was Virginia governor from 2014 to 2018, faces Republican Glenn Youngkin on Tuesday in seeking the position again.

Here are four things to know about Elias, 52, and his role as a top election lawyer for Democrats.

1. Flipping Elections, or Trying to Do So

Elias helped turn a few Democrats who appeared to have lost on election night into winners.

He was not part of the legal fight over Florida’s electoral votes in the disputed 2000 presidential election. But Elias was busy that year on the team that represented Democrat Maria Cantwell in her defeat of incumbent Sen. Slade Gorton, a Republican, in Washington state. Out of nearly 2.5 million votes cast, Cantwell emerged the winner with 2,200 votes.

Eight years later, Elias represented the Franken campaign in Minnesota’s U.S. Senate race. Initially, it appeared that Sen. Norm Coleman, the Republican incumbent, had won. But the election went into overtime with recounts.

The biography of Elias on the website of the Perkins Coie law firm boasts that the Coleman-Franken race was “the largest recount and contest in American history.”

With almost 3 million votes cast, Franken trailed Coleman by 725 votes after Election Day. But after the first canvass, the incumbent’s lead was slashed to little more than 200 votes.

The recount dragged on for six months before the final tally showed Franken squeaking by with 312 votes.

In 2010, the conservative group Minnesota Majority released an 18-month study that found at least 341 felons voted illegally in the Coleman-Franken contest, enough to have made the difference.

Most of those votes by felons were cast in the Minneapolis-St. Paul region, according to the study.

Elias “helped Franken overturn the U.S. Senate race in Minnesota, and raised millions of dollars for that effort,” von Spakovsky told The Daily Signal. “They put together a complex political machine to count a lot of ballots that should not have been counted and reject other ballots.”

Last year, Eias was unsuccessful in litigation in which Rep. Ted Brindisi, D-N.Y., attempted to overturn his loss to Republican challenger Claudia Tenney.

Elias represented Hillary Clinton’s presidential campaign in 2016 and was responsible for hiring the opposition research firm that would prompt the narrative that Donald Trump’s campaign conspired with the Russian government to win the 2016 election.

Elias was responsible for hiring Fusion GPS, which resulted in an anti-Trump document written by former British spy Christopher Steele—the infamous Steele dossier. The unverified dossier alleged that the Russians might have salacious, compromising information on Trump.

The document also became the basis for federal investigations into alleged collusion between the Trump presidential campaign and Russian operatives to affect the outcome of the 2016 election.

The narrative eventually was debunked by the final report from special counsel Robert Mueller, which found that investigators “did not establish that members of the Trump campaign conspired or coordinated with the Russian government.”

In 2020, Elias led lawsuits around the country to change state laws to allow for expanding mail-in and absentee voting, and to allow the controversial practice of ballot harvesting, during the COVID-19 pandemic.

By April of last year, the lawyer had filed more than 20 lawsuits in 14 states and vowed to double that by the end of the election cycle, NPR reported.

Ellias is the founder of Democracy Docket, a website devoted to election litigation.

In March, the 5th U.S. Circuit Court of Appeals sanctioned Elias and other lawyers with the Washington-based law firm of Perkins Coie for filing a “redundant and misleading” motion in a case over a Texas law that scrapped straight-ticket voting.

A panel of 5th Circuit judges determined that a motion in the case was “nearly identical” to a motion filed by the same lawyers in September. The judges said Elias and his colleagues “failed to notify the court that their previous and nearly identical motion was denied,” and that the “inexplicable failure” violated “their duty of candor to the court.”

The 5th Circuit panel also said the lawyers who filed the motion,  “without directly saying so, sought reconsideration of their already denied motion.”