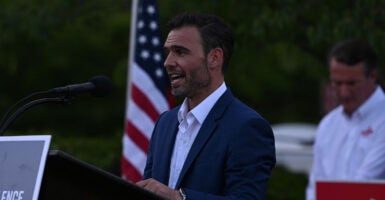 A county schools superintendent in Virginia complained to the county sheriff’s office over its rejection of “extraordinary” security requests for school board meetings in August, documents reviewed by The Daily Caller News Foundation show.

Loudoun County School Superintendent Scott Ziegler requested personnel, a K-9 sweep, and undercover presence from the Loudoun County Sheriff’s Office, which was rejected, according to documents obtained by the Fight for Schools PAC through public records requests.

The Loudoun County Sheriff’s Office also disagreed with the decision not to allow residents to speak at a June 22 meeting of the Loudoun County School Board and said the board was being dismissive of people with whom it didn’t agree.

The father of a sexual-assault victim, Scott Smith, was arrested for “unlawful assembly” at the June 22 school board meeting when he tried to speak out against the passage of a school district policy that allows students to use school restrooms for the gender with which they identify.

Smith’s ninth-grade daughter was sexually assaulted by a boy wearing a skirt who entered a girls restroom at Stone Bridge High School on May 28.

On Aug. 6, the Sheriff’s Office said it “would not be supporting LCPS for the meeting” on Aug. 10 or 11, according to notes outlined in a letter to Ziegler from Loudoun County Public Schools chief operations officer, Kevin L. Lewis, who spoke with Sheriff Mike Chapman.

Chapman defended his office’s decision not to provide support because the school board “unilaterally” decided to limit public comment, hire a security firm with a metal detector, and put a security plan in place without consultation with the Sheriff’s Office.

Chapman said he believed those attending the June 22 meeting should have been allowed to speak publicly, but that he still bore all of the criticism, including death threats, while Ziegler and the school board “took none of the push back from the community or national arena.”

The Sheriff’s Office also said that six of the nine school board members “brought this to bear by creating anti-racist groups on social media” and that he, along with the Sheriff’s Office, received national criticism and took the blame as the “bad guy(s)” after the June 22 meeting.

School board member Beth Barts, who was allegedly involved in an “anti-racist” Facebook group, resigned this month. The group reportedly created lists of parents who opposed critical race theory or who called for the reopening of schools for in-person learning.

Chapman said the board was attempting to do the same thing with the Aug. 10 and 11 meetings, but that the Sheriff’s Office “won’t be put in that position again.”

In an Aug. 6 email to Chapman, Ziegler requested assistance, including multiple Sheriff’s Office deputies, a K-9 explosive sweep, a five-person Quick Reaction Force, undercover officers, and a special-operations team on standby nearby.

The same day, Chapman responded that Ziegler’s requests were “extraordinary” and that Ziegler didn’t provide “any justification for such a manpower intensive request” that “would likely constitute [the Sheriff’s Office’s] commitment of a minimum of approximately 65 sworn deputies,” the letter said.

Chapman told Fox News that he bolded “extraordinary” and “any justification” for emphasis in his email.

Chapman said Ziegler’s email did not describe the Loudoun County Public Schools’ plans to only allow “[10] members of the public inside at any given time.” He said that Ziegler also didn’t explain that the Loudoun County Public Schools would search and use metal detectors on members of the public and hired its own “armed security guard” for inside the building, along with nine other “unarmed” security personnel.

Ziegler’s response rebuffed Chapman’s claim that the Loudoun County Public Schools “unilaterally” devised a security plan for the Aug. 10 and 11 meetings and said it has “maintained a collaborative relationship” with his office for years. He said he was surprised by Chapman’s response that the Loudoun County Public Schools’ request was “extraordinary” because it “mirrors the resources and support that [the Sheriff’s Office] provided on June 22.”

Chapman and Ziegler did not immediately respond to The Daily Caller National Foundation’s request for comment.