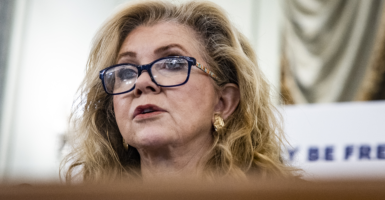 Sen. Marsha Blackburn is standing behind essential workers who may be fired for standing up to President Joe Biden’s vaccine mandates, she told The Daily Signal.

“It is so important that we give them the opportunity to have their choice,” the Tennessee Republican said Thursday in a phone interview.

Blackburn has introduced legislation, dubbed the Keeping Our COVID-19 Heroes Employed Act, aimed at assisting essential workers who face being fired under the president’s vaccine mandates.

“Our essential workers figured out how to handle COVID and they showed up,” Blackburn told The Daily Signal. “They did their job. And many of them got COVID [and] recovered; they have antibodies. They do not want to be forced to take a vaccination in order to keep their jobs.”

“They were the heroes last year,” she said. “Now this year you’ve got the Biden administration and Joe Biden saying, ‘If you don’t get the jab, I’m going to get you fired from your job.’”

The pressure to get a COVID-19 shot or be fired is frustrating to many front-line workers, law enforcement officers, health care workers, first responders, and employees of airlines and trucking companies, Blackburn said.

A press release from Blackburn’s Senate office cites a recent survey conducted by the Tennessee Chamber that found 76% of Tennessee businesses oppose the government’s mandating vaccination protocols for them.

The senator stressed that she herself has been vaccinated thanks to former President Donald Trump’s initiative to develop vaccines, noting that essential workers who wish to get vaccinated should talk to their physicians and decide for themselves whether to do so.

“I thank God every day that President Donald Trump had the foresight to do Operation Warp Speed,” Blackburn said of the public-private partnership designed to find vaccines. “Then he challenged our federal agencies and our pharmaceutical companies to get him behind this and to figure out a vaccine to get things done.”

Many Americans have sought religious exemptions to vaccine mandates, citing concerns that one or more of the vaccines was created using aborted fetal cell lines.

Others object to the haste with which the COVID-19 vaccines were developed, are frustrated with authoritarian government mandates, or concerned about how the vaccines will affect fertility.

New York Gov. Kathy Hochul, a Democrat, said in September that she was unaware “of a sanctioned religious exemption from any organized religion” that would exempt health care workers from her vaccine mandate.

Blackburn told The Daily Signal in the interview that “some entities,” including the Biden administration, have been “pushing back on religious freedom and religious liberty.”

The Tennessee senator suggested that Democrats and the Biden administration discount religious exemptions because “moving forward with this vaccine mandate is a way for them to push government control of your health care.”

“And of course, we know that they want government control of your children, of your health care, of your checking account,” Blackburn said. “They want a cradle-to-grave, daylight-to-dark, 24/7 [system of control]. They are intent on radically transforming this nation into a socialist government.”