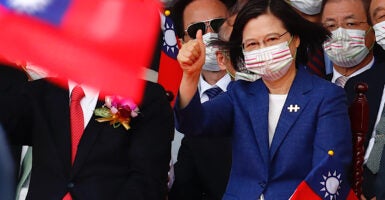 David Calhoun is a recent graduate at Grove City College and a member of the Young Leaders Program at The Heritage Foundation. 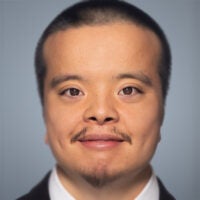 Justin Rhee is an Asian Studies Center Program Coordinator and Research Assistant within The Davis Institute for National Security and Foreign Policy at The Heritage Foundation.

From Oct. 1 to Oct. 10, the world witnessed the full extent of the divergent paths China and Taiwan are on.

If the gravity of the situation in the Taiwan Strait wasn’t clear before, it should be now. Before exploring the U.S. response to those developments, it’s important to understand the significance of the different “National Days” that bookended those events.

On Oct. 1, 1949, Mao Zedong formally established the People’s Republic of China. For the Chinese Communist Party, that day marks the end of the “Century of Humiliation”—more than 100 years of military defeats, economic stagnation, and political turmoil.

Before that, China’s ruling Qing Dynasty had expanded Chinese territory through successful conquests of modern-day Mongolia, Tibet, Xinjiang, and Taiwan. In addition, the Qing had made China the world’s largest economy, dwarfing those of the U.S. and the major European powers.

But China never joined the Industrial Revolution, and from 1842 onward, it was a nation clearly in decline.

For the Chinese Communist Party, Oct. 1 symbolizes the rejuvenation of the Chinese nation—and the party’s role in that effort.

The Chinese Communist Party points to China’s growth into the second-largest economy in the world, its ascendant military, and the 800 million Chinese who have been lifted out of poverty since 1990 as evidence of that.

But Taiwan’s continued separation from actual Chinese Communist Party rule is seen by President Xi Jinping as “the most serious hidden danger to national rejuvenation.”

So long as Taiwan remains de facto separate from Chinese Communist Party rule, the party’s efforts to right the wrongs of the “Century of Humiliation” will be incomplete.

However, 100 miles across the Taiwan Strait, the Republic of China recognizes Oct. 10 as its National Day.

On that day in 1911, the Xinhai Revolution began. It led to the establishment of the Republic of China, and the abdication of the last Qing emperor.

For Taiwan, the significance of “Double-Ten Day”—as it is known colloquially, because the date is written “10-10″—is complicated.

While it reflects mainland China’s status as the ancestral home for 95% of Taiwan’s people, it also attaches Taiwan’s national identity to events that did not occur in Taiwan.

In 1911, Taiwan was a colony of Japan—ceded by China after the First Sino-Japanese War (1894-1895) under the Treaty of Shimonoseki. It was not until the end of World War 2 that Taiwan became, once again, a part of China.

In 1949, however, the Republic of China government fled to Taiwan. The 72 years since have led to Taiwan’s populace identifying increasingly as Taiwanese and not Chinese, with a recent survey finding only 3% of Taiwan’s people identify exclusively as Chinese.

Taiwanese President Tsai Ing-wen, in her most recent National Day speech, reflected the complex interplay of these sentiments and Taiwan’s geopolitical situation in saying that “the Republic of China and the [People’s Republic of China] should not be subordinate to each other,” while also referencing a constitutional order that still envisions Taiwan as a part of One China (ROC).

It’s a delicate needle to thread, but she’s done it remarkably well for five years. Tsai also affirmed the diametrically opposed priorities of mainland China and Taiwan by emphasizing Taiwan’s “enduring commitment to a free and democratic constitutional system.”

It’s in this context that 152 of Beijing’s People’s Liberation Army warplanes entered Taiwan’s air-defense identification zone. The Global Times even described the flights as a “National Day military parade in the Taiwan Straits.”

That record number of flights is a sobering reminder of Beijing’s commitment to achieving, in Xi’s words, “the complete reunification of the motherland.”

The U.S. and its partners must take a nuanced approach in navigating through Beijing’s and Taipei’s divergent paths. If we fail to do so, the likelihood of the U.S. exacerbating tensions into a catastrophic conflict or standing idly by as Taiwan’s people lose the ability to determine their future will increase.