In Loudoun County, Pence Calls for School Officials to Resign Over ‘Cover-Up’ of Sexual Assaults 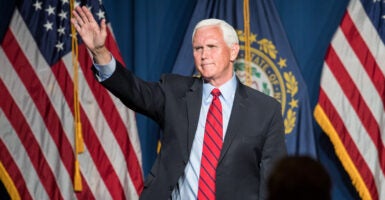 On the heels of a student walkout, former Vice President Mike Pence traveled Thursday to Loudoun County, Virginia, to praise concerned parents and students—and to call for school officials to resign over their “cover-up” of recent sexual assaults in county schools.

“School board members and anyone responsible for this tragedy and cover-up should resign immediately,” Pence said, referring to sexual assaults that the Loudoun County Sheriff’s Office said were committed by the same teenage boy at two different high schools.

Pence also spoke about other matters while visiting Patrick Henry College in Purcellville, Virginia, such as his support for school choice and what advocates call patriotic education.

But, as events in Loudoun County schools continued to go viral, the former vice president began his remarks by noting: “The eyes of the nation are on Loudoun County, Virginia.”

“It’s amazing to think in recent weeks, Loudoun County has becoming the epicenter of a powerful movement that is spreading all across this country—a movement of concerned parents and patriotic citizens demanding an end to curriculums that divide our nation and accountability for educational bureaucrats who put political correctness ahead of the interest of our kids,” Pence said.

School board members and administrators, under scrutiny for policies on gender identity and critical race theory, have denied covering up the sexual assaults.

In July, the Loudoun County Sheriff’s Office charged the teenage boy with two counts of forcible sodomy in a May assault on a ninth-grade girl in a high school restroom, as The Daily Wire first reported. The boy, 14 at the time of the rape, reportedly wore a skirt into the girls’ room.

The same “gender-fluid” biological male later was charged with sexual battery and abduction in an October assault on another female student in a room at school.

Earlier this week, in the May case, a juvenile court judge found the boy, now 15, guilty of sexually assaulting the ninth-grade girl in the restroom.

The assaults occurred in two different high schools. Loudoun County Public Schools reportedly transferred the boy to the second school after he was accused of the rape in the restroom at the first school.

Some parents allege that Loudoun County school officials covered up the sexual assaults while implementing new policies the school board says were designed to protect transgender students.

Schools Superintendent Scott Ziegler had said earlier that “the predator transgender student or person simply does not exist.” Ziegler, who is paid $295,000 a year, also said: “We don’t have any record of assaults occurring in our restrooms.”

One member of the Loudoun County School Board has resigned.

Pence called the series of events the “tragic consequences that happen when schools prioritize radical left ideology above all else, including the safety of our kids.”

“It breaks my heart and it angers me to think that those crimes happened because some adults cared more about politics than the well-being of our kids,” Pence said, adding:

Pence also called for U.S. Attorney General Merrick Garland to “rip up” his Oct. 4 memo calling for the FBI to investigate parents who speak up to protest the policies of local school boards.

He also said that teaching or using critical race theory in schools is “state-sponsored racism.”

The parents’ movement in Loudoun County is one aspect of public school parents speaking up across the United States, the former vice president said.

“To all those parents and students, patriotic Americans, here and looking on, I came here today simply to say from the bottom of my heart, on behalf of millions of people across this country, ‘Thank you for your courage,’” Pence said. “You have reminded America that these schools are ours and public education belongs to the American public.”