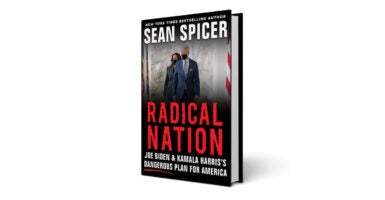 Sean Spicer, who served as press secretary in the Trump White House, is the host of "Spicer & Co." on Newsmax TV.

Founded in France in 1839, the Little Sisters of the Poor is a Catholic order of nuns who operate 29 care homes across the United States. The nuns take vows of chastity, poverty, obedience, and hospitality, and they serve Christ by serving the elderly poor.

When the Patient Protection and Affordable Care Act (aka ACA or “Obamacare”) was enacted in March 2010, it required employers to offer health insurance plans that included contraceptives, abortifacients, and sterilizations—all of which violate the precepts of the Catholic Church.

St. Paul once wrote that all who will live godly in Christ Jesus will suffer persecution. The Obama administration was determined to make good on that biblical promise and proceeded to persecute the Little Sisters all the way to the U.S. Supreme Court.

In 2017, the Trump administration took over and structured an accommodation that resolved the Little Sisters’ problems with the ACA mandate. In October of that year, the Department of Health and Human Services issued an updated religious-exemption rule that protected religious nonprofit organizations such as the Little Sisters of the Poor.

The next month, November 2017, attorneys general from several states, including Pennsylvania and California, ramped up the persecution of the Little Sisters. They went to court and obtained a nationwide injunction against the new HHS rule. Pennsylvania and California sued the federal government, asking the judges to force the Little Sisters to comply with the Obamacare mandate or face millions of dollars in penalties.

The Little Sisters set an example for us all, refusing to back down in the face of government pressure. They were determined to serve the elderly poor without lending support or endorsement to abortion. They correctly understood that the assault on their freedom was an assault on the sanctity of human life.

Is this really why government exists? To harass and intimidate nuns who are simply living out their faith and serving the poor? It’s hard to believe, but there are people in government who get up in the morning and say, “I’m going to punish a Catholic ministry today! I’m going to scare nuns and force them to pay for abortions!”

I mean, such a person would have to be a mustache-twirling villain of the Snidely Whiplash variety, right?

Well, meet one of the persecutors of the Little Sisters of the Poor—namely, President Joe Biden’s secretary of health and human services, Xavier Becerra. In November 2017, after the Little Sisters had already prevailed once in the Supreme Court, it was Becerra [then the state attorney general] who made the decision for California to sue again in federal court to take away the nuns’ religious exemption. He lost that case in 2020—but the following year, Biden tapped Becerra to lead the Department of Health and Human Services, the very agency he had unsuccessfully sued in 2017.

In February, Becerra was in a Senate confirmation hearing for the Biden Cabinet post, trying to explain away his relentless pursuit of the Little Sisters of the Poor. Sen. John Thune, R-S.D., said to him, “It does seem like, as attorney general, you spent an inordinate amount of time and effort suing pro-life organizations, like Little Sisters of the Poor, or trying to ease restrictions or expand abortion.”

Apparently realizing how bad his pursuit of the Little Sisters looked, Becerra replied, “I have never sued the nuns, any nuns. I’ve never sued any affiliation of nuns, and my actions have always been directed at the federal agencies.”

It’s a flimsy alibi. Becerra did, in fact, sue to force a religious order of nuns to pay for Obamacare’s contraceptive and abortifacient mandates. Moreover, the case is named State of California v. Little Sisters of the Poor. It doesn’t get any plainer than that. Had Becerra won his case, the Little Sisters would have lost millions of dollars, along with their First Amendment rights. Becerra pursued the nuns in court for three years.

Despite his evasive testimony, Becerra did sue nuns, an act of cold-hearted villainy that would have done Snidely Whiplash proud. As Sen. Tom Cotton, R-Ark., tweeted on Feb. 24, “Xavier Becerra is now claiming he didn’t sue nuns because he wants to get confirmed. But Becerra did sue nuns. He repeatedly harassed the Little Sisters of the Poor. That’s why he should be rejected by the Senate.”

In selecting Becerra to head HHS, Biden signaled his intention to move America to the extreme edge of pro-abortion policy. No American politician has ever demonstrated more enthusiasm for unrestricted abortion than Becerra.