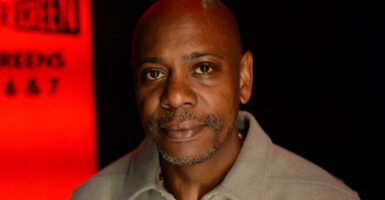 In a new comedy special on Netflix, Dave Chappelle, pictured at the U.K. premiere of "Dave Chappelle: Untitled" on Oct. 17, 2021, in London, said, "Gender is a fact. Every human being in this room, every human being on Earth, had to pass through the legs of a woman to be on Earth. That is a fact." (Photo: Eamonn M. McCormack/Getty Images)

Many conservatives praised Netflix for “standing up to cancel culture” by defending its decision to carry Dave Chappelle’s comedy special “The Closer.”

Critics in the LGBTQ community accuse him of misogyny and of bashing transgender people. Among comments that attracted controversy, Chappelle said, “Gender is a fact. Every human being in this room, every human being on Earth, had to pass through the legs of a woman to be on Earth. That is a fact.”

According to Forbes, Chappelle was “roundly criticized by advocacy groups including GLAAD, the Human Rights Campaign and the National Black Justice Coalition.” The National Black Justice Coalition issued a statement: “With 2021 on track to be the deadliest year on record for transgender people in the United States—the majority of whom are Black transgender people—Netflix should know better.”

A Newsweek headline read: “Netflix’s Defense of Dave Chappelle Stirs Hope on the Right of End of ‘Cancel Era.'” And New York Post film critic Kyle Smith wrote: “Netflix this week has provided the rest of the culture with a simple example of what to do when the woke mob comes demanding human sacrifice and ritualized electronic humiliation: Just say, ‘Nah.'”

Netflix initially stood by Chappelle and reportedly suspended three disgruntled employees for intruding, uninvited, into a virtual meeting where executives discussed how to respond to critics.

At the time, Netflix co-CEO Ted Sarandos said, “While some employees disagree, we have a strong belief that content onscreen doesn’t directly translate to real-world harm. … Adults can watch violence, assault, and abuse—or enjoy shocking stand-up comedy—without it causing them to harm others.”

And Netflix’s other co-CEO, Reed Hastings, said, “I do believe that our commitment to artistic expression and pleasing our members is the right long-term choice for Netflix.” And Hastings also pointed out that the special received a high score from its audience on the rating website Rotten Tomatoes.

As to Hastings’ defense of the Chappelle special due to its high audience rating, consider this. “Uncle Tom,” the film I executive produced that was directed by Justin Malone, had the exact same Rotten Tomatoes approval rating, 96%, as did “The Closer.” But, despite our best efforts, Netflix refused to carry it. Amazon Prime and iTunes agreed to make the documentary available to their users, but not Netflix.

Also, Netflix is heavily invested in the extraordinarily popular Chappelle. The entertainment company signed him to a mutually rewarding long-term deal. It wanted to protect its investment.

More importantly, while it took a few days, Netflix walked back its ringing defense of artistic freedom. In an interview only days after his email defending Chappelle, Sarandos said he “screwed up”: “What I should have led with in those emails was humanity. I should have recognized the fact that a group of our employees was really hurting. … To be clear, storytelling has an impact in the real world … sometimes quite negative.”

Should conservatives applaud an entertainment platform that refused to carry a “conservative” documentary with the same high rating as “The Closer”? Had Netflix anticipated the negative left-wing criticism leveled at Chappelle’s special, would it have aired it as is?

Chappelle, in a public appearance right after the controversy, said: “If this is what being canceled is like, I love it. … F— Twitter. F— NBC News, ABC News, all these stupid-ass networks. I’m not talking to them. I’m talking to you. This is real life.” Netflix says it intends to continue its relationship with Chappelle. Time will tell. This will be a test for Netflix and for Chappelle.