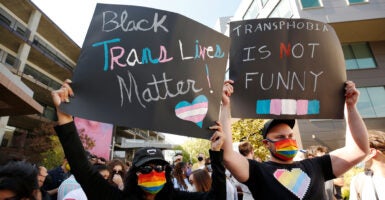 Tens of thousands of pro-lifers can assemble and be ignored, but assemble two dozen transgender lobbyists, pictured on Oct. 20, regarding the new Dave Chappelle Netflix special and NBC and PBS will treat it as momentous. (Photo: Al Seib/Los Angeles Times/Getty Images)

The left claims their most urgent battle is to save democracy, but when it comes to any questioning of the LGBT lobby, they are the ones who sound like authoritarians. The overtones are unmistakable in the “news” coverage promoting “dozens” of employees walking out of Netflix in Los Angeles on Oct. 20 in protest. The target? A popular Dave Chappelle comedy special, “The Closer.”

Tens of thousands of anti-abortion advocates can assemble and be ignored, but assemble two dozen transgender lobbyists and NBC and PBS will treat it as momentous.

Reporter Steve Patterson began: “Tonight, Netflix employees walking out of the company’s Hollywood office after weeks of internal backlash.” They didn’t specify a number of protesters. But the story had all sound bites from one side: the LGBT side. That’s unless you count them reading a quote from Netflix CEO/Obama money man Ted Sarandos apologizing profusely for “screwing up” with the outraged radical employees.

NBC featured two angry trans activist sound bites and two sound bites of openly gay Variety “reporter” Matt Donnelly, who acted more like a spokesman for the protesters. He said Sarandos originally “did not feel it was hate speech, which went down incredibly badly with Netflix’s trans and LGBTQ-plus employees.”

NBC noted the in-house protesters made a list of demands, and Donnelly added, “I think that Netflix is going to have to put its money where its mouth is. This specific bloc of employees are galvanized to continue to hold them accountable.”

For what? NBC’s stilted story failed to offer one clip or quote or explanation of what Chappelle said that was offensive. We can guess it’s because the comedian said “gender is a fact,” and, “Every human being on Earth had to pass through the legs of a woman to be on Earth. That is a fact.” Is that somehow too horrific for NBC to include?

NBC also shamelessly failed to report that there were counterprotesters sticking up for Chappelle right there at this walkout. In the video, you can briefly see a protester holding up a “Jokes Are Funny” sign, but otherwise, NBC couldn’t offer one hint of dissent.

Over on the “PBS NewsHour,” anchor Amna Nawaz displayed the taxpayer-funded network’s allegiances by putting on trans woman Imara Jones of TransLash Media. No debate allowed. Nawaz attempted one question about free speech in comedy. “They just say comedy is supposed to be provocative. Shouldn’t there be a space for that?”

So, stating that human babies come out of women is “hate speech.”

Right before her comedy question, Nawaz assisted Jones by offering gay-lobby estimates. “The data does speak volumes here. According to Human Rights Campaign, 2021 is set to be the most violent year on record for transgender and gender-nonconforming people.” Make a joke and you’re responsible for murder?

Jones concluded, “Netflix may become a stigma brand. That is to say, it may no longer be a place where you’re proud to say that you work … Netflix could be in real trouble.” And so our “free speech” media offers themselves as eager allies with trans tyranny over what kind of speech can be allowed.