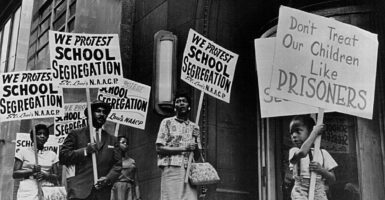 Demonstrators picket in front of a school board office protesting segregation of students. In Wellesley Public Schools, students are racially segregated into “affinity groups,” according to a lawsuit filed Tuesday. (Photo: National Archive/Newsmakers/Getty Images)

Parents Defending Education filed the lawsuit against the Boston-area Wellesley Public Schools Tuesday in the U.S. District Court for the District of Massachusetts—a lawsuit that specifically targets both the racially segregated student groups and the school’s speech policies.

“Nearly seven decades of Supreme Court precedent have made two things clear,” said the lawsuit. “Public schools cannot segregate students by race, and students do not abandon their First Amendment rights at the schoolhouse gate. [Wellesley Public Schools] is flouting both of these principles.”

The school system has held “multiple racially segregated events for students,” the Parents Defending Education lawsuit said, describing how the school district’s equity director lamented that the school did not keep a list of students sorted by race and ordered white students not to come to certain events.

Not only did the school host these racially segregated events, the lawsuit said, it also refused to host a Jewish students’ affinity group or to fly Israeli or Thin Blue Line flags “as a gesture of viewpoint diversity” when parents complained about Black Lives Matter flags at various schools.

The lawsuit also alleges that Wellesley Public Schools displayed “similar disregard for students’ First Amendment rights” through a policy that punishes “biased” student speech, including “any student speech that is ‘offensive,’ has an ‘impact’ on others, ‘treats another person differently,’ or ‘demonstrates conscious or unconscious bias.”

“Clearly Wellesley schools did not think anyone would hold them accountable, or else they would not have pursued such a discriminatory policy,” Parents Defending Education President Nicole Neily told The Daily Signal. “School administrators have felt invincible for too long, but parents across the country are fighting back. A child’s race should never disqualify them from participating in school events.”

Wellesley Public Schools declined to comment on the lawsuit Wednesday to The Daily Signal.

One member of Parents Defending Education, the national grassroots organization behind the lawsuit, is a parent of a former Wellesley Public Schools middle school student.

This parent’s child reportedly “stopped speaking in class after watching other students repeatedly report their classmates to [Wellesley Public Schools] authorities for engaging in ‘biased’ speech when they shared their political beliefs,” the lawsuit said.

Under Wellesley Public Schools Biased Speech Policy, a “bias incident” is a “conduct, speech or expression” that “has an impact but may not involve criminal action” and “demonstrates conscious or unconscious bias that targets individuals or groups that are part of a federally protected class.”

A “bias incident” can also occur if “someone treats another person differently or makes an offensive comment because of their membership in a protected group, such as their race, ethnicity, gender, sexual orientation, religion, or disability,” the lawsuit said.

These complaints may be made anonymously, and Wellesley Public Schools offers the following examples of potential biased behavior.

When the school system receives a complaint of biased behavior, it promises to “promptly” investigate the complaint and to notify the Anti-Defamation League and the Wellesley Police Department “when relevant,” according to the lawsuit. Investigating officials will reportedly fill out a “[Wellesley Public Schools] Bias Investigation Summary Form” on their conclusions and what disciplinary or corrective action will follow.

“If [Wellesley Public Schools] concludes that a student committed a ‘bias incident,’ its response ‘will typically involve the following: discipline for the person responsible, remedial or supportive actions to assist those directly impacted, [and/or] corrective action or education steps for the individual and potentially the school community to ensure that similar events do not happen in the future,’” the lawsuit said.

The school system “also ‘document[s]’ and preserves ‘any’ complaint alleging a bias incident and ‘review[s] such data periodically to analyze it for patterns of behavior,’” the lawsuit added, noting that the school system boasts of being “proactive” in preventing “incidents of bias.”

Wellesley Public Schools’ definition of biased speech is so broad that it includes everyday expressions, such as using the words “normal” and “regular” to “refer to one person or way of life as opposed to another.” The school system maintains that such language perpetrates “hegemony.”

Words like “forefathers,” “mankind,” and “businessman” are also frowned upon by the school system, since these words “deny the contributions (even the existence) of females,” according to Wellesley Public Schools guidance.

Another example of biased speech frowned upon by the school district: describing Native American tribes from early America as “roaming,” “wandering,” or “roving” across the land.

According to Wellesley Public Schools, “such language implicitly justifies the seizure of Native lands by ‘more goal-directed’ white Americans who ‘traveled’ or ‘settled’ their way westward,” according to the lawsuit.

These policies are enforced by the school system administrators, teachers, and officials, the lawsuit said.

Wellesley Public Schools also instructed faculty and staff to be on the watch for “white fragility,” according to the lawsuit.

The school system reportedly defined this concept as “the counterproductive reactions white people have when their assumptions about race are challenged, which serves to maintain racial inequality,” noting that “white fragility is characterized by emotions such as anger, fear, guilt, and by behaviors including arguing, crying, silence, or walking away from the stress inducing situation.”

During a school sponsored presentation at Wellesley High School in the spring of 2021, according to the lawsuit, students were told that pro-law enforcement groups like Blue Lives Matter are “associated with white supremacy, far-right nationalism, and racism” and that supporting these groups “could be harmful to … BIPOC [black, Indigenous, and people of color]” students.

That same presentation told students that “police started the violence” that occured during the summer 2020 rioting and protesting, the lawsuit said.

The school system released a plan for “diversity, equity and inclusion” in 2020, according to the lawsuit, a plan with a goal to “pursue justice for” historically marginalized communities in order to “continuously examine systems of privilege and bias,” and to “work collectively to disrupt and dismantle inequity in all its forms” and achieve “racial equity.”

Part of these efforts included “affinity groups” and “affinity spaces for students with shared identity,” according to the lawsuit, intended to “nurture and affirm positive racial identity development.”

Wellesley Public Schools defines a racial affinity group as “an opportunity for people within an identity group to openly share their experiences without risk of feeling like they will offend someone from another group, and without another group’s voices,” the lawsuit said.

In January, according to the lawsuit, Diversity, Equity, and Inclusion Director Charmie Curry reportedly sent a Jan. 25 email to Wellesley middle school principals announcing a February affinity group for “black and brown students.”

The email reportedly asked that only “black and brown” students be invited to attend, and the lawsuit said that further promotion of the event by the school system did not invite non- “black or brown” parents or students to the event.

A few weeks later, Wellesley Middle School teacher Kyle Eichner reportedly emailed Curry asking whether the students and their families had already been invited to the event.

“I’ve shared the email with principals and asked that it be shared with school-based teams,” Curry responded, according to the lawsuit, before lamenting that she did not have access to a list of students organized by race.

“Unfortunately, I don’t have access to student/parent emails disaggregated by demographic data to really hone in,” Curry reportedly wrote. “So, I’m relying on teaching teams to communicate this opportunity to students directly.”

“Hi students,” the email said, according to the lawsuit. “Today, our WPS Office of Diversity, Equity and Inclusion will host a Healing Space for Asian and Asian American students (grades 6-12), faculty/staff, and others in the BIPOC (Black, Indigenous, People of Color) community who wish to process recent events.”

The email includes a note at the end: “This is a safe space for our Asian/Asian-American and Students of Color, *not* for students who identify only as White. If you identify as White, and need help to process recent events, please know I’m here for you as well as your guidance counselors. If you need to know more about why this is not for White students, please ask me!”

Curry reportedly went so far as to tell a white teacher that the teacher could not attend the event because “we want to hold the space for the Asian and Asian American students and faculty/staff.”

“I hope this makes sense,” Curry told the white teacher, according to the lawsuit, noting that several other teachers were told the same thing. Curry did not immediately respond to a request for comment from The Daily Signal.

“Despite WPS’s commitment to using affinity groups to support ‘historically marginalized’ groups, the policy appears to apply only to certain minority groups,” the lawsuit said. “In response to the Racial Affinity Group Policy, parents asked WPS whether it intended to create affinity groups for Jewish students, a ‘historically marginalized’ people, in the wake of public acts of antisemitic violence and discrimination. WPS refused to create such a group.”