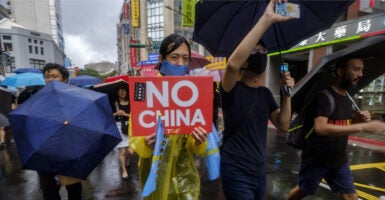 China is testing the U.S. by threatening Taiwan. Pictured: A young woman carries a sign saying "No China" while taking part in a march in Taipei. (Photo: Alberto Buzzola/Getty Images)

Foreign policy is most effective when it strikes a balance between idealism and realism that gains the support of a majority of the American people. When foreign policy becomes either too idealistic or too “realistic,” public support wanes.

Consider Afghanistan. Today it stands as an embarrassing failure of U.S. policy. The more idealistic elements of the mission there had been drastically scaled back since 2009. Yet even a decade later, the American public still thought we were trying to build a liberal democratic society with a massive deployment of military force—a glaringly unrealistic formula.

An outstanding example of a successful U.S. policy is how President Ronald Reagan ended the Cold War. He embarked on a massive military buildup—including the Strategic Defense Initiative—which the Soviet Union could not match. It forced it to sue for peace.

What, then, should our policy be toward the Republic of China on Taiwan, a democracy, a longtime trading partner, and a critical ally during World War II? In 1979, the U.S. officially recognized Communist China and de-recognized the Republic of China. Since then, the United States has continued to deal with both governments, albeit in different capacities.

The policy was codified with the Taiwan Relations Act, which pledges the United States to preserve “extensive, close and friendly commercial and cultural contacts” with Taiwan. It also requires Washington to make weapons available to Taiwan that will enable it to “maintain a sufficient self-defense capability.”

The law also obligates the president to promptly inform Congress “of any threat to Taiwan’s security or the social or economic system.” Should that happen, he, together with Congress, decide upon an appropriate response.

That moment may soon be upon us.

The tension between the two sides of the Taiwan Strait has accelerated in recent weeks as Chinese President Xi Jinping declared that reunification must happen and will happen. Although he added the word “peacefully” in his address, Xi subsequently approved extensive military exercises near Taiwan, including the flight of 149 military aircraft into Taiwanese airspace. In reply, Taiwanese President Tsai Ing-wen reiterated that Taiwan has no interest in being subsumed by Communist China.

The looming Taiwan crisis presents the U.S. with the opportunity to follow a balanced policy of idealism and realism. On the idealistic side, Taiwan warrants our backing because it is a vibrant democracy. It was a stalwart ally during World War II, engaging an estimated 1 million Japanese troops who otherwise would have defended Japan in the event of a U.S. invasion. In addition, we should be concerned with the fate of the 24 million people of Taiwan if they should become vassals of China’s expanding authoritarian regime.

On the realistic side, the U.S. depends on Taiwan to supply two-thirds of the semiconductors or chips found in iPhones, computers, and cars. We cannot afford to have a hostile adversary like Communist China control a leading maker of chips. Neither can we afford an aggressive China’s breeching of the first island chain that runs through Taiwan and serves to restrain Beijing.

There is little likelihood of a shooting war between Communist China and America over Taiwan. Xi is stoking national fervor on the mainland to consolidate his hold on power.

But Beijing is testing the U.S. will as part of its long-range objective of replacing the United States as the world’s leading superpower. If we do not respond appropriately, such as conspicuously displaying American strength in the South China Sea, China will step up the pressure on Taiwan.

These are the times that test a nation’s will. Tsai has often observed that there is no reason to declare Taiwan’s independence because it is already independent. Defending its prerogative to determine its own future free of Chinese coercion is in America’s national interest. And it is in keeping with our ideals as well. What we do will be noted closely by friends and allies as well as adversaries around the world.