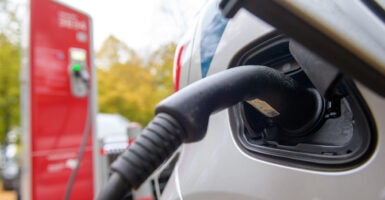 True to the image of a stereotypical car salesmen, President Joe Biden and congressional leadership are pitching a multitrillion-dollar spending package that they say won’t cost middle-class Americans a dime.

That’s like telling someone who came to the dealership to buy a Honda that they can have a Mercedes instead. Sure, if the dealership backloads the payments, the price may be the same for the first few years, but not when the true costs kick in.

The $3.5 trillion tax-and-spend package is no different. In addition to costing everyday Americans more in taxes and higher prices, this transformation of the American economy has some scary implications for how federal lawmakers may try to dictate the products and services that Americans buy.

For example, federal policymakers will micromanage the economy by using the tax code to subsidize electronic vehicles and—if Biden gets his way—prop up labor unions.

Currently, the federal government provides electric vehicle tax credits of up to $7,500 for Americans who buy an electric vehicle made by a company that hasn’t already sold more than 200,000 vehicles. Subsidies for electric vehicles may seem, at least ostensibly, to help make them more widely available to ordinary Americans.

In reality, electric vehicles and other zero-emission cars accounted for only 2% of car sales in 2019 and tax credits have disproportionately benefitted corporations and wealthy Americans living in California.

California is home to 42% of electric vehicles—perhaps unsurprising as the state is banning the sale of gasoline-powered vehicles starting in 2035 as part of its radical climate agenda.

Of the estimated $7.5 billion in electric vehicle credits to be claimed between 2018 and 2022, corporations will take about half. Of the other half claimed by individual Americans, 78% will go to people making over $100,000 per year.

But taxpayer subsidies for corporations and high-income households could skyrocket under the $3.5 trillion tax-and-spend package. The House of Representatives’ version would increase the maximum electric vehicle tax credit to $12,500 and make it available as a tax write-off or a cash rebate. The Joint Committee on Taxation estimates this will divert $16 billion in tax revenue.

Maybe in concept that sounds like a nice way to proudly support American businesses and workers. In reality it would inflate electric vehicle costs and penalize most workers who prefer not to join a union. It could even backfire and lead to fewer electric vehicles being produced and sold in the U.S.

Only about 14% of autoworkers are unionized in the U.S. Meanwhile, foreign-owned automakers now employ more U.S. workers than domestic automakers.

As domestic auto production is less than half what it was 25 years ago, foreign auto production shot up 82% over the same period. Betting long on a declining stock and short on a rising one has never been a good investment strategy.

Not only would higher subsidies targeted at unionized labor and U.S.-made parts drive up costs for the subsidized vehicles, but they would shrink the types of cars eligible for the tax credits. According to Autos Drive America, 52 cars potentially qualify for current electric vehicle credits.

But under the $3.5 trillion tax-and-spend package, only two cars would qualify for the maximum $12,500 electric vehicle credit. Those happen to be the same cars some parking garages are prohibiting drivers from parking in due to the risks of batteries potentially catching on fire.

There may be other unintended consequences, too. Foreign-owned auto companies looking to expand or build new manufacturing facilities in the U.S. might scale back or reconsider such investments if it becomes apparent that U.S. lawmakers will engage in crony energy and labor policy that gives U.S competitors a $4,500 leg up.

States that have worked hard to attract good-paying jobs, protect worker freedoms, and increase economic output could also be penalized by such crony policies.

Instead of striving for robust and open competition to attract more electric vehicle investment and production in the U.S., the message to automakers seems to be that they need to pay to play in a rigged U.S. market intended to benefit union bosses and wealthy individuals at the expense of hardworking Americans.

Current taxpayer subsidies for electric vehicles are already problematic and fail to benefit ordinary Americans. Doubling down on them makes even less sense.