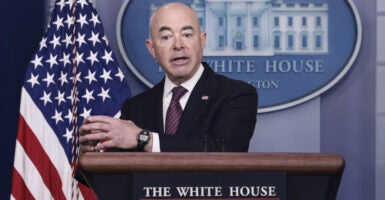 Sen. Rick Scott is calling for Homeland Security Secretary Alejandro Mayorkas to resign, charging that he lied to members of Congress and the American public about the security of the border.

Two former senior officials of Mayorkas’ department who served in both the Obama and Trump administrations agree Mayorkas should either resign or be fired.

“He has to resign. He came and lied to us. He said the border was secure. He lied,” Scott, R-Fla., told The Daily Signal Wednesday after a Senate Republican briefing with border security experts.

Mayorkas stated earlier this year that the southern border is closed. He restated that as recently as September during testimony before the Senate Homeland Security and Governmental Affairs Committee.

“He has data. He didn’t give it to us,” Scott said, adding, “He told me when I interviewed him before he took the job he would enforce the law. He’s not enforcing the law. He told me he would be transparent and give me the information I asked for. He doesn’t.”

During the forum on Wednesday, Scott asked for a show of hands from how many of the people speaking to the Senate panel thought Mayorkas had lied about the situation on the southern border. Six of the eight invited to speak about the border raised their hands.

Scott said, “He has to resign.”

The Department of Homeland Security did not respond to The Daily Signal for this article.

Others attending Wednesday’s Senate GOP forum on the border agreed on the need for a new secretary.

Tom Homan, the acting director of Immigration and Customs Enforcement in the Trump administration, said he was initially pleased to hear President Joe Biden would nominate Mayorkas for DHS secretary.

Homan, a career ICE official, was appointed as executive associate director of the agency in 2013 and worked with Mayorkas, then-deputy homeland security secretary.

“When I was first contacted and asked what I thought of his nomination, I thought it was a pretty good choice,” Homan told The Daily Signal of Mayorkas. “You know why? Because he’s dealt with a surge before, and we are in the middle of a surge, thinking he would do what he did as deputy. He has done a complete 180.”

But Homan doesn’t think Mayorkas should resign from the Cabinet.

“He should not resign with dignity. He has no dignity,” Homan said. “He needs to be fired. He’s lying to the American people. He’s the secretary of homeland security who intentionally makes a less secure border that causes more death, more crime.”

The border policy experts spoke at a public briefing with Republican Sens. Ron Johnson of Wisconsin, Rob Portman of Ohio, and Rick Scott of Florida. The GOP senators said they held the forum because the Democratic Senate majority won’t hold a hearing on the border.

Johnson did not outright call for the secretary’s resignation, but said the Biden administration seemed to be in denial.

“This is something that can’t remain hidden. The administration is denying the reality,” Johnson told The Daily Signal. “They are saying the border is closed. The news media—let’s face it—they’re not covering it.

There should have been so many drones around that bridge in Del Rio [in Texas], different news agencies trying to figure out what’s happening there. There was only one, only [Fox News Channel’s]. I will point out, even what happened in Del Rio—that is just a little more than two days’ flow of illegal migrants right now. The problem is much bigger.

During the briefing, Portman suggested Mayorkas should not get all the blame, and that he’s likely just following orders from the Biden administration.

Mark Morgan, acting director of Customs and Border Protection during the Trump administration, told The Daily Signal that working for an administration is not an excuse to lie.

“Neither one of us,” Morgan said, referring to Homan standing beside him, “regardless of how much we supported President [Donald] Trump, neither one of us would have done anything that was in violation of the law, and then, [No. 2], lie to the American people.”

Morgan is a visiting fellow for national security and foreign policy at The Heritage Foundation, of which The Daily Signal is the news outlet.

Morgan was the Customs and Border Protection director during part of the Obama administration and worked with Mayorkas, who then was the deputy DHS secretary. Both Homan and Morgan said they don’t recognize Mayorkas as the man they worked with.

“The fact that he is lying to the American people alone should be grounds for impeachment,” Morgan said. “He’s literally saying the border is closed.”