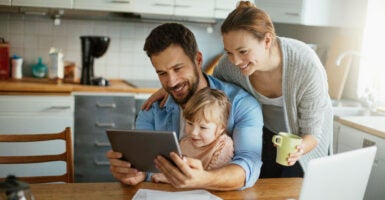 New research illustrates the value that women (and society) still put on a man to serve as a provider for his wife and family, even in this day of dual-earner families. (Photo: Geber86/E+/ Getty Images)

Nearly three years ago, Fox News host Tucker Carlson made the following statement: “Study after study has shown that when men make less than women, women generally don’t want to marry them. Maybe they should want to marry them, but they don’t.”

Carlson was vilified for those comments, but a recent study proves that in some significant ways worth further study and consideration, there was merit to Carlson’s assertion.

A few weeks ago, I came across an article written by Rosemary Hopcroft, a professor of sociology at the University of North Carolina at Charlotte. Hopcroft reported on her new research that documents how high-income men are more desired by women for marriage than men at the lower end of the financial spectrum.

On the other hand, men were far less concerned with the income level of their prospective spouse.

Hopcroft’s findings are similar to those reported in a 2017 Pew Research Center survey. That survey found that 71% of adults thought it was very important for a man to financially support his family if he is to be a good husband, while only 32% (and 25% of men) felt the same about a woman doing so to be a good wife.

What this research illustrates is the value that women (and society) still put on a man to serve as a provider for his wife and family, even in this day of dual-earner families. Unfortunately, today, that sort of man is becoming harder to find.

For instance, the National Student Clearinghouse documented an alarming drop in the number of men in four-year colleges in relation to the number of female enrollees, with the ratio now being 60% to 40% in favor of women attending college.

There are many reasons for that, including how colleges have become hostile environments for men.

While some men can find good-paying jobs without college, for most, the avenue to unlock higher-paying jobs continues to be through a college education.

The U.S. Census Bureau reports that individuals with bachelor’s degrees earn twice as much as those who do not have a degree. If we want men to provide, we need to allow them to have access to the educational means to do so.

But the sad truth is that with fewer men going to college, there are fewer prospects for women seeking a high-income spouse.

Many young women lament the lack of what they perceive to be “eligible” men to marry—that is, responsible and financially successful men who will eagerly embrace the male role of providing for his family. They want men who have found a purpose in life, who are disciplined and focused, and who realize their lives are not entirely their own.

Instead, they are finding men who live for themselves and expect their spouse to either share the provider role or be the main provider. Thus, these women often end up with a Hobson’s choice; namely, either settle for a less-than-desirable mate or remain single.

And sadly, if women choose to settle for a man who refuses to take his role as a provider seriously, the results are often bad, because the husband often lacks motivation to work hard and sacrifice for his wife and children.

Marriages crumble because the husband either refuses to be a good provider for his wife and family or is incapable of doing so.

A middle-to-high-income man, on the other hand, is more likely to be industrious, conscientious, and intelligent—all good qualities for a lifelong mate and for a stable society because, as Hopcroft points out, they not only get married, but stay married.

That’s not to say that all high-income men are men of impeccable character and that low-income men are not. Being a good provider also means valuing personal character over accomplishments, family over career, and responsibility over autonomy.

If a man does not have those characteristics, it doesn’t matter how much money he makes. He’s doomed to failure as a husband and father.

But when we do not allow men the opportunity to embrace their natural role to be a provider for their wife and family, we not only harm men, but we deny women and children the type of husband and father that will allow them to thrive as well.

As a society, we need to encourage men to embrace their provider role, instead of discouraging it. If we do so, we will strengthen our marriages and families, the fundamental institutions for a stable and strong society. And that is what the research is showing what women really want.

It’s also the path toward marriage and family restoration in America.