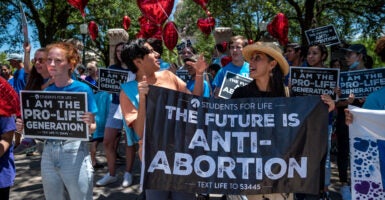 Pro-life activists gather near the Texas state Capitol on May 29 in Austin, Texas, in support of a bill outlawing abortions after a fetal heartbeat is detected that had been signed into law days earlier by Texas Gov. Greg Abbott. If the Supreme Court overturns Roe v. Wade in a case originating from Mississippi, the Texas law would likely survive legal challenges. (Photo: Sergio Flores/Getty Images)

The Supreme Court this term will hear a major abortion case, which will provide the justices with the opportunity to make a long-overdue course correction on vague and unworkable standards set in motion by the court’s 1973 Roe v. Wade decision that don’t account for advances in modern science.

Specifically, the court will answer “whether all pre-viability prohibitions on elective abortions are unconstitutional” (that is, prohibitions on abortion before the child can survive outside the womb).

The case, Dobbs v. Jackson Women’s Health Organization, stems from Mississippi’s 2018 Gestational Age Act, which prohibits abortions after 15 weeks with exceptions for a medical emergency or a severe fetal abnormality.

A baby is considered full term at 40 weeks’ gestation, but viability occurs earlier in pregnancy. In 1973, viability was considered to be approximately 28 weeks’ gestation. Today, 24 weeks is widely accepted, and babies are surviving even earlier—some as early as 21 weeks, such as Micah Pickering.

In an amicus brief submitted to the court by a group of medical professionals, it points out that since Roe, the “supposed viability line has now moved at least a month and a half earlier than was contemplated in Roe.”

What scientific developments will the next 50 years bring? The “viability standard” imposed by the Supreme Court is ultimately an arbitrary line made without scientific analysis or justification and has prevented much state policymaking on abortion to bring the law in line with the science.

Parents don’t even have to go to their doctor to view their child on an ultrasound. Boutique facilities across the country provide families with nondiagnostic keepsake videos and images of their children, making it even easier for parents to find out if they are having a boy or a girl, hang their unborn baby’s picture on the refrigerator, and allow for friends and extended family to share in the excitement by seeing the earliest images of the child.

These images and videos aren’t just in 2D, they can also be in 3D and 4D. We can see, in real time, as children in the womb yawn, kick, or suck their thumb.

In 1973, doctors couldn’t have dreamed of the ways they are now able to treat unborn patients. As science and technology advances, the field of perinatal medicine has exploded with options to diagnose, plan for, and treat various conditions—including surgery while children are still in the womb.

Likewise, knowledge about fetal pain—and how it may be felt as early as at 12 weeks, far earlier than previously thought—has changed the standard of care for surgical procedures in utero, palliative care for babies born too early to survive, and more.

Despite the numerous ways scientific knowledge and technology have advanced since 1973, the Supreme Court—through Roe v. Wade and later decisions, such as Planned Parenthood v. Casey—has prohibited states from enacting laws that are grounded in modern science.

Mississippi compellingly argues that it’s time for the high court to finally change course: Nothing in the Constitution’s text, structure, history, or tradition supports a constitutional right to abortion, and Mississippi has just as much authority to legislate on abortion as it does on other subjects, including legislation addressing abortion before viability.

The so-called viability standard is arbitrary and ultimately unworkable, and until it is rejected, it will remain a barrier to states such as Mississippi being able to enact laws that reflect current—not outdated—science.

Nearly half a century of abortion jurisprudence has led to a status quo that doesn’t account for advances in science.

It’s not 1973 anymore, and the Supreme Court has an opportunity to make a course correction rooted in a proper understanding of the Constitution and acknowledge the humanity of children in the womb.