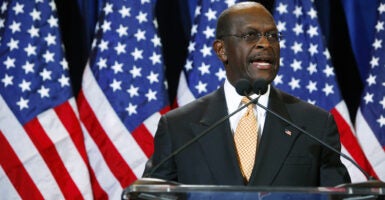 Popular social media site Reddit seems to be suffering from a huge lack of empathy.

Visitors to the site are greeted not just by pictures of cats or the newest Marvel trailer, but posts from an increasingly popular subreddit called r/HermanCainAward.

The subreddit is named after former businessman and Republican presidential candidate Herman Cain, who was infamous online for his supposed coronavirus carelessness after he was spotted at a June 2020 Donald Trump rally in Tulsa maskless. Cain died in July 2020 due to complications related to COVID-19.

Key to this story is the word “supposed,” as even BuzzFeed News reports, “Cain wasn’t a COVID denier.”

“Early on in the pandemic, he convened a meeting with his staff to set down protocols for handwashing, social distancing, and wearing masks,” the article notes. “He also got in the habit of opening episodes of his daily video show by reminding viewers to take the virus seriously and follow guidelines from the Centers for Disease Control and Prevention.”

So, what brings the nearly 375,000 members of a subreddit named for a man maligned as a COVID-19 denier together? Open mockery and scorn of people who share Cain’s skepticism about heavy-handed government responses to the pandemic—whom they call “anti-vax, anti-mask, anti-mandate”—who have died from coronavirus. The majority of the time, they mean conservatives or Trump supporters.

“Nominees have made public declaration of their anti-mask, anti-vax, or COVID-hoax views, followed by admission to hospital for COVID,” reads the community description. “The Award is granted upon the nominee’s release from their Earthly shackles.”

The average post starts with a myriad of the deceased’s social media commentary rejecting the leftist orthodoxy regarding COVID-19. Next comes a screenshot describing how the person has contracted the disease and is starting to feel the symptoms. One final image at the end of each macabre slideshow informs the reader that the person has died.

Sickeningly, posters aren’t finding strangers to ridicule. The derided COVID-19 victims often come from the poster’s own circle of friends or social connections.

While the concept of mocking the dead is revolting on its own, the comments made by the so-called tolerant left on each post are what make this entire subreddit truly despicable.

Even for the unimaginably low standards of the radical left, the Herman Cain Award subreddit represents a new and deeply upsetting frontier in the ongoing partisan war between leftists and conservatives.

Death threats and celebrating the deaths of one’s opponents in politics, while sickening, are nothing new. Politicians on both sides of the aisle have faced their fair share of threats to themselves and their families. And when a prominent member of the political class dies, it’s a given the internet will be full of comments celebrating their death.

But this venom, once reserved for politicians, has now been extended to the average American leading a private life.

What’s more, the cabal of leftist ghouls on the subreddit seem to forget that each “award winner” whose death they mock is a person just like them. The “fat thumb-head” leaves behind family and friends, people they loved and who loved them in return.

Besides the obvious moral failings inherent in mocking the deaths of your political opponents, we have seen the dire consequences when politics drives Americans this far apart.

In a speech delivered at the Illinois statehouse in 1858, future President Abraham Lincoln uttered some of the most famous words in American history, “A house divided against itself cannot stand.”

Those words are as relevant now as they were in Lincoln’s day. And while thankfully the prospect of an armed civil war among Americans seems dim, there are warning signs flashing in the distance.

As Redditors turn against each other, wish death on each other, and see each other as less than human based on nothing more than political or philosophical differences, it is important we reflect on where this path leads to if this behavior becomes the norm in American society.

It’s time to bring compassion back. To do otherwise invites only ruin.