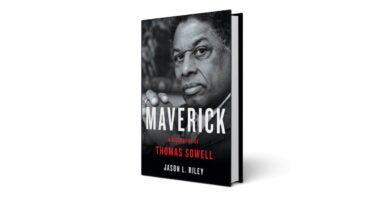 The following is excerpted from Jason Riley’s book “Maverick: A Biography of Thomas Sowell,” about the iconoclastic economist. The book is available here.

Though he’s better known for his writings on racial controversies, Thomas Sowell spent the early part of his career writing mostly about economic history.

After releasing an undergraduate economics textbook in 1971, he published two books on the history of economics, “Say’s Law: An Historical Analysis” (1972) and “Classical Economics Reconsidered” (1974).

Unlike most of his later works, neither one was written for general readers. They featured original scholarship in his specialty, intellectual history, and they assumed a basic understanding of economics and a familiarity with technical language.

But even in those earlier works, we get glimpses of what would become the author’s trademarks. Both books questioned orthodox thinking, and both included observations that other scholars writing on the same subject had missed altogether or perhaps underplayed in significance.

“The classical economists are often depicted as defenders of the status quo, apologists for the socioeconomic powers (and practices) that be,” he wrote, referring to prominent 18th- and 19-century figures such as Adam Smith, Thomas Malthus, James Mill, and John Stuart Mill.

Sowell, however, believed that characterization was off-base. He argued that their real concern was creating and sustaining economic growth to help the working class.

He also said it would be more accurate to liken them to anti-establishment radicals, given how their laissez-faire theories challenged the thinking of landmark philosophers, including Plato and Machiavelli. The whole notion of a self-equilibrating system—the market economy—meant a diminished role for intellectuals and politicians.

“In addition to opposing such major contemporary institutions as imperialism and slavery, the classical economists attacked the dominant social classes of the time: the landed aristocracy, the rising capitalists, and the political powers,” he noted.

And then we get this Sowellian insight: “One of the curious facts about the classical economists is that most of them were members of minority groups—minorities not simply in some numerical sense, but in ways that were socially relevant,” he wrote. “Being a Scotsman was not an incidental fact in the England of Adam Smith’s day. … Malthus, the two Mills, and J.R. McCulloch were also Scottish.

“David Ricardo was of Jewish ancestry, and Jean-Baptiste Say was descended from Huguenots who had fled France during religious persecutions. Whatever their varying personal fortunes might be, these men were never full-fledged members of the establishment.”

In “Say’s Law,” Sowell chronicled the development of, and various controversies surrounding, a concept that is foundational to classical economics. The doctrine gets its name from the aforementioned French economist Jean-Baptiste Say, whose writings in the early 19th century helped popularize the works of Adam Smith throughout Europe and in the United States.

In the wake of the Industrial Revolution, there was growing concern that the ability to produce so many more goods than before would outpace the ability of people to buy what was being produced, resulting in large stockpiles of unsold goods and high levels of unemployment.

Say was among those who argued that there was no need for a nation to worry about overproduction or underconsumption, because the total supply of goods would always equal the total demand for them. “Say’s Law,” which states that “supply creates its own demand,” is based on the premise that the very act of making things generates buying power equal to the value of what is being made.

The book was an expansion of Sowell’s doctoral thesis, and he chose the topic over the strong objections of his mentor and dissertation committee chairman, George Stigler, who was widely recognized as the top scholar in the history of economic thought.

Stigler, who would later be awarded the Nobel Prize in economics, told Sowell that enough had already been written on the subject, and besides, he thought Sowell’s interpretation was wrong. Of course, Sowell pressed on anyway, and by most accounts found something new and interesting to say.

Reviewers credited him with writing “the first full-fledged history of the great controversies that Say’s Law provoked,” and praised his “mastery of elusive sources and the sustained power of critical analysis to which he subjects them.”

“Say’s Law” was a “desperately needed” book that “belongs on the shelves of all economists who are interested in the origins and development of their discipline.” It was yet another example of Sowell believing in himself, going his own way despite the warnings of others, and exceeding expectations.

In “Classical Economics Reconsidered,” Sowell extended his treatment of the origins of Say’s Law and added an analysis of the historical development of several other major concepts in macroeconomic and microeconomic theory.

Like its predecessor, “Classical Economics Reconsidered” went over well with most critics. Again, these works were written primarily for serious students of economics, so unless mathematical models of general glut theory quicken your pulse, they’re likely to be challenging reads. But when Sowell chose to write in his field of expertise, he clearly excelled.

These books showcased his considerable talents as both an economist and a historian, and his peers noticed.

A final note about these two early works: Although the word “reconsidered” appears in only one of the titles, both books are in fact reconsiderations of prior analyses.

That was to become a hallmark of Sowell’s scholarship. Sometimes, it was explicit, as when he used similar phrasing in titles such as “Affirmative Action Reconsidered” (1975) and “Judicial Activism Reconsidered” (1989). Other times, it was more implicit, but still abundantly clear that his intent was to challenge a prevailing “assumption” or “vision,” or to offer what he considered to be a more accurate account of the past.

But whether the subject was intellectual history, residential housing patterns, or language development in children, Sowell brought a certain skepticism of conventional theories to his analysis. He insisted on making up his own mind, which sometimes involved going back to square one and questioning the very framework that others had used to reach their conclusions.

Sowell distinguished himself as a scholar by taking nothing for granted and seeking answers to questions that others had long stopped bothering to ask.