Eroding Congressional Support for Israel Is Cause for Alarm 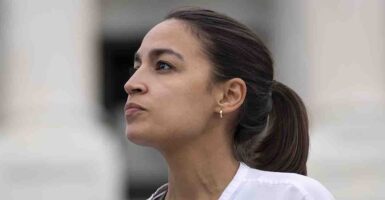 Rep. Alexandria Ocasio-Cortez, D-N.Y., is part of a group of progressive legislators who have been increasingly critical of U.S. support for Israel. Pictured: Ocasio-Cortez talks with a reporter on the steps of the U.S. Capitol on Aug. 3. (Photo: Drew Angerer/Getty Images)

With instability and political unrest roiling the world stage, it is more important than ever for America to have solid allies in the Middle East, a dangerous region historically rife with conflict and dysfunction.

Americans know and understand almost innately that Israel’s values are a mirror of our own: Israel champions democracy and the rule of law, has a strong judiciary, and demonstrates freedom of religion and the press.

However, our recent hurried withdrawal from Afghanistan and the ensuing chaos illustrates how quickly fortunes can change in this volatile region. The resulting pandemonium underscores how much we need a steady and strong ally like Israel in the raging sea of despotism and autocracy that is the Middle East.

Regardless of which poll you cite, support by Americans for our vital ally Israel never truly wavers because Israel, as a democratic nation, stands in stark contrast to the hateful and controlling regimes run by the region’s autocrats and despots.

Backing for our democratic ally has historically been constant and bipartisan, even among Americans who are usually woefully divided on a whole range of topics.

That is why it is so jarring and shocking to witness eroding support for Israel among political leaders who are not showing the same commitment to Israel that the vast majority of Americans continue to feel. Nowhere is that change more obvious than within the Democratic Party.

It is more than past time to sound the alarm on holier-than-thou members of Congress who reflexively side with Palestine over Israel. What once appeared to be a flickering trend is now becoming a pervasive view within a party that is going shockingly astray from the values that it professes to champion.

It is stunning to see progressive American policymakers bending over backward to invoke pronouns to refer to someone’s gender identity while showing support for a reactionary Palestinian regime that does not allow for homosexuality and systemically discriminates against women. It makes no sense.

Rep. Alexandria Ocasio-Cortez, a progressive Democrat, recently burst into tears on the floor of the House and had to be consoled by Democratic colleagues when the House voted in favor of authorizing the Defense Department bill, which included funding for Israel.

Ocasio-Cortez is part of a group of progressive legislators who have been increasingly critical of U.S. support for Israel. She has called Israel an “apartheid state” and outspokenly blasted the Jewish state’s efforts at self-defense during the most recent military flare-up between Israel and the terrorist group Hamas in Gaza. She has loudly and repeatedly called on President Joe Biden to dial back support for Israel.

Why was the sensitive legislator weeping for passage of a bill that she ultimately reversed course upon and chose not to oppose? She was taking a stand against funding for the Iron Dome, a purely defensive military system designed to intercept Palestinian-fired short-range rockets and artillery shells lobbed into Israel with the sole purpose of indiscriminately killing as many Israelis as possible.

Why would any member of Congress vote against or lament America helping to defend the lives of men, women, and children in a pro-American nation targeted in their homes by terrorist groups that deny their right to exist? Is it better to stand with a terrorist organization that embraces tactics of mass shootings, car rammings, suicide bombings, and widespread rocket terrorism against innocents?

The leadership of the Democratic Party owes it to America to rein in its misguided members and halt the staggering slide toward the abandonment of Israel by the party. This is a serious issue that demands immediate attention. We can’t allow this issue to slide by without notice or to be glossed over by a mainstream media quick to ignore the stark and stunning trend.

Support for Israel should remain bipartisan and strong, and Democrats should not jettison support for a true and long-standing American ally in favor of a terror-sponsoring regime that employs violence in the cause of destroying Israel.