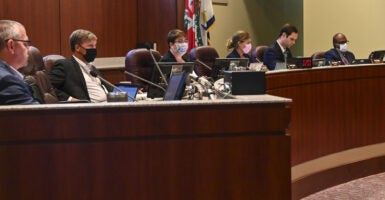 This incident is a harbinger of what will happen as school systems, law enforcement, and other powerful groups embrace politically correct social justice agendas over the safety and security of all.

On June 22, weeks after the incident, the young woman’s father, Scott Smith, was arrested at a Loudoun County, Virginia, school board meeting for protesting a proposal that would expand protections for transgender students.

He was dragged out, arrested, and later charged with disorderly conduct and resisting arrest. He was merely upset about his daughter’s sexual assault and the connection to changing school policy so that biological boys can use the women’s bathroom if they identify as transgender. The school banned Smith from its property.

The only person who has been convicted of a crime is the heartbroken, angry father, not the young man who assaulted not one, but two women—the story later reveals—in the women’s restrooms.

“My wife and I are gay- and lesbian-friendly,” Smith told The Daily Wire. “We’re not into this children transgender stuff. The person that attacked our daughter is apparently bisexual and occasionally wears dresses because he likes them. So this kid is technically not what the school board was fighting about. The point is kids are using it as an advantage to get into the bathrooms.”

Many angles of this story are disturbing. Elected Democrats in Loudoun County are implementing liberal policies in school districts despite the obvious ramifications as described. The school brushed off the sexual assault of a young woman in order to continue pressing for broad bathroom policies that are inclusive to the small transgender population in high school. The school administrators also treated a concerned father disrespectfully.

The story also reveals an obvious truth about criminal behavior: Predatory people will take advantage of any policy that favors them.

Even though a small percentage of society’s citizens are sexual predators, it only takes a few to upend the lives of victims and clog the criminal court divisions. Similarly, it’s also true that among the transgender population, which is already quite small, very few—if any—are sexual predators.

However, that does not mean sexual predators would not readily take advantage of loosened or broad bathroom policies that allow bisexual or transgender people into women’s bathrooms. The nature of predatory criminals is that they can and will find loopholes so they can prey on vulnerable people easier—transgender or not.

This has already happened in California. In January 2021, SB 132 was implemented. This law allows prisoners to request which facility they will be placed in based on their preferred gender, along with a few other parameters.

Like clockwork, nearly 30 biological males asked to be transferred to California’s two women’s prisons. Many of these men were in prison for committing murder or sexual assault. Female prisoners must now live in fear and comply with this law, which was passed to protect the feelings of biological males.

The Daily Wire article—worth a subscription and a read—provides harrowing details about how bad things will get if political correctness and law enforcement align to cover up truth. It also provides an inside look at just how sexual predators will use school bathroom policies or loose laws favoring transgender people for social justice’s sake.

This is a watershed moment for conservatives, particularly parents, who wish to shield their children from leftist ideology taking precedence over physical safety.

Most transgender people, like the rest of society, are largely not criminals, but all it takes is a few predatory people to take advantage of well-meaning, politically correct laws to wreak havoc on the vulnerable.