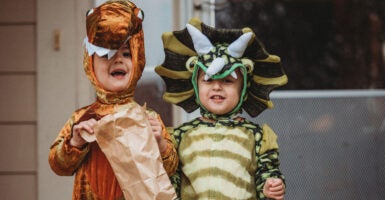 A Seattle elementary school canceled its Halloween parade, citing concerns that the annual event “marginalizes students of color who do not celebrate the holiday,” according to KTTH-AM radio talk-show host Jason Rantz.

The school did not consult parents on the decision, but encouraged them to join the Racial Equity Committee, which is responsible for the parade’s cancellation, according to a newsletter obtained by KTTH and a statement from a Seattle Public Schools spokesperson.

David Malkin, an Asian parent of a student at Benjamin Franklin Day Elementary, described it as an “exercise in affluent white vanity that is wokeism,” the radio station reported.

“I’m sure they don’t want to hear from anyone of any race or ethnicity that doesn’t really want to go along with them in lockstep,” he added.

“Halloween events create a situation where some students must be excluded for their beliefs, financial status, or life experience,” the school said in the newsletter obtained by the radio station. “Costume parties often become an uncomfortable event for many children, and they distract students and staff from learning. Large events create changes in schedules with loud noise levels and crowds. Some students experience overstimulation, while others must deal with complex feelings of exclusion. It’s uncomfortable and upsetting for kids.”

“I don’t see any way in which this actually addresses any inequities, to the extent that there are any inequities,” Malkin told Rantz. “You know, this just seems like grandstanding on behalf of the principal and the staff who are predominantly white.”

Students will instead participate in “thematic units of study about the fall,” “autumnal artwork,” and “sharing all the cozy feelings of the season,” KTTH reported.

Students of color “have requested to be isolated on campus while the event took place,” according to the school system spokesperson, the radio station reported. “In alliance with [Seattle Public Schools’] unwavering commitment to students of color, specifically African American males, the staff is committed to supplanting the Pumpkin Parade with more inclusive and educational opportunities during the school day.”

Benjamin Franklin Day Elementary Principal Stanley Jaskot did not respond to The Daily Caller News Foundation’s request for comment regarding the elementary school’s decision or whether parents supported the parade’s cancellation.