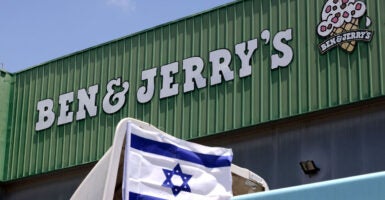 Ben & Jerry’s announced it would stop selling its ice cream in what its co-founders call occupied Palestinian territory of the West Bank and Gaza Strip. Pictured: An Israeli flag hangs onto a delivery truck outside a Ben & Jerry’s factory in Be’er Tuvia, a settlement located in Israel’s Southern District. (Photo: Emmanual Dunand/AFP/Getty Images)

Axios reporter Alexi McCammond recently conducted an interview with progressive darlings and Ben & Jerry’s co-founders, Ben Cohen and Jerry Greenfield. Cohen and Greenfield both touched on the company’s decision to stop selling its ice cream in what they call occupied Palestinian territory of the West Bank and Gaza Strip.

>>> Watch: The Ben & Jerry’s co-founders explain why they decided to stop selling ice cream in what they call occupied Palestinian territory.

To put it generously, the interview was a complete and unbridled disaster.

McCammond pressed the pair on Ben & Jerry’s decision to boycott certain parts of Israel, but not Georgia as a result of the state’s election integrity measures or Texas due to the state’s new pro-life laws. Ben & Jerry’s has spoken out on both states’ actions. Clearly disoriented by a reporter calling them out on their hypocrisy, the duo gave a muddled and confused response.

Though Cohen and Greenfield are no longer officially in charge of the company they founded, they still act as the public face of the business. It can generally be inferred that what they say reflects the values of the company.

McCammond’s question is completely fair. The company, and by extension its founders, clearly views Georgia’s election integrity laws, Texas’ pro-life bill, and Israeli settlements as morally repugnant. Yet, only one merited a boycott. Why?

The answer, shocking as it may be to leftist consumers who praise Ben & Jerry’s for its socially progressive views, is that the ice cream giant cares more about its bottom line than gaining woke brownie points.

It is far easier to justify boycotting a small part of a country where Ben & Jerry’s does middling business than it is to boycott states in America, which is where the company does a significant number of sales.

In an interview with The Daily Signal, Stephen Soukup, author of “The Dictatorship of Woke Capital: How Political Correctness Captured Big Business,” argues that woke capital is a “top-down, anti-democratic movement on the part of some of the biggest and most important names in American business to change the way business functions, to change the definition of capitalism, and to change the very relationship between the citizen and the state permanently.”

This can be seen on display with some of the most fervent leftist businesses, including Ben & Jerry’s, that promote causes and organizations totally antithetical to American prosperity. Marxist organizations like Black Lives Matter find themselves buoyed by corporations desperate to earn social clout, and with that clout, increased profits.

But as demonstrated by Ben & Jerry’s and other brands, that devotion to radical causes ends at the precipice of lost profits.

In 2019, the men’s razor brand Gillette launched an ill-advised and condescending ad campaign supporting the #MeToo movement, replacing its normal slogan, “The best a man can get,” with a new, more progressive slogan, “The best men can be.”

The campaign went over like a lead balloon and quickly became the target of mockery and scorn. Yet in the face of this derision, did Gillette hold the line and continue to promote the radical #MeToo campaign?

Of course not. As reported by Forbes, the campaign likely lost Gillette 30% of its market share. The campaign was an utter failure and died an ignoble death.

Gillette failed because it went too far and became too woke. The trade-off of gaining the favor of leftists wasn’t worth losing its core audience of men who just want to shave.

As conservatives begin to fight back against the tides of woke capitalism, it would behoove to keep the hypocrisy of Ben & Jerry’s in mind. The most effective way to counter this strain of radical leftism in business is to vote with our wallets.