China Will Test America on Taiwan. What Will Joe Biden Do? 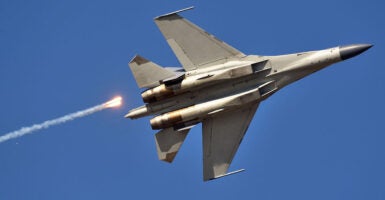 Deterring China from starting a war over Taiwan is what matters most, and that only works as long as the military balance remains unfavorable to China. Pictured: A Chinese air force fighter in midflight. (Photo: Jingying Zhoa/Getty Images)

Given the stakes, and rather ambiguous assurances from the U.S. regarding Taiwan’s security, what happens when Beijing tries to test U.S. resolve?

The current Taiwan Relations Act does not provide any guarantee or assurance of a U.S. military response should China attack. But the 1979 act does stipulate that the U.S. will provide Taiwan with arms to defend itself and that Washington will maintain the military capacity to compel a peaceful resolution between China and Taiwan.

Deterring China from starting a war over Taiwan is what matters most, and that only works as long as the military balance remains unfavorable to China.

Beginning in 2019, the Trump administration declassified three internal Reagan-era memos. These memos became known inside government as providing the “six assurances.” They made clear then, as do continued arms sales to Taiwan and proximate U.S. military presence today, that the U.S. will act to ensure the situation is resolved peacefully.

However, the threat from the mainland in recent years has ratcheted up significantly. And despite successive administrations continuing to provide Taiwan defensive weapons, the balance of military power has been slipping, first against Taiwan, and now against the U.S.

In 2005, Beijing passed an anti-secession law mandating that military force be used should Taiwan declare independence. However, subsequent statements from Beijing make clear patience for unification is not unlimited, and lack of tangible progress toward this by Taiwan could just as easily result in the People’s Liberation Army attacking.

Given this imbalance, every act of the People’s Liberation Army and every speech Chinese President Xi Jinping makes regarding Taiwan’s future carries added import. That’s why Xi’s speech, delivered on the 100th anniversary of the Chinese Communist Party, got so much attention—especially when he discussed “[s]olving the Taiwan question and realizing complete unification … ”

So, is China going to attack?

Short answer: Only Xi knows. Absent that information, here are a few thoughts.

A range of pressures, including an aging population, unresolved territorial disputes, and a slowing economy, is conspiring to challenge the Chinese Communist Party’s legitimacy, which is premised on a post-Tiananmen promise of prosperity. These pressures may lead Xi to take action over Taiwan before Beijing’s economic and military advantages dwindle—the so-called Davidson Window.

Then there is the “Pax Olympics” school that sees concern over global image forestalling Chinese aggression till after the 2022 Winter Olympics. There are ready indicators this is at play. The communists in Beijing have attempted to discredit critical foreign press as they seek to validate their authoritarian governance to the world through the stage of the Winter Olympics. A similar timeline revolves around next fall’s Communist Party congress. It’s easy to imagine that Xi will be reluctant to do anything rash before that is complete.

There is also the prospect, supported by Chinese strategic writings, that Beijing would rather wait for Taiwan to fall into its lap than risk military action in the near-term. Beijing views the U.S. as a power in decline and itself as ascending, making it confident that the balance of power is tipping its way. Counterbalancing this (to Beijing) comforting assessment is the communists’ concern that people in Taiwan increasingly see themselves as separate from the mainland.

Either way, the years between 2023 and 2027 are shaping up to be a most dangerous time.

On top of the unfavorable military balance, having paid no discernable price for recent transgressions, China will feel less constrained. Consider: China’s unilateral abrogation of the 1984 Sino-British Joint Declaration in 2021 governing the return of Hong Kong resulted in no sanctions. Its ongoing genocide of Uyghurs in Xinjiang brought only weak sanctions.

So, is the U.S. ready, should China test our resolve over Taiwan?

Until Afghanistan’s poorly executed evacuation in August, the answer would have been a ‘yes.’ But President Joe Biden’s dilatory and perfunctory leadership in that arena have now raised questions.

Urgent action is needed to boost confidence in our nation’s leadership and ability to direct action in a fast-moving war. Past due is a debate on how to better posture and ensure our military is authorized to respond promptly in the event of a rapidly escalating attack on Taiwan, when time is of the essence.

In short, no matter the explicit declaratory policy regarding the defense of Taiwan, it is the military balance that matters most to Xi and the People’s Liberation Army. Helpful in this regard is keeping our allies close like Japan and Australia while building our partnership with India—but that is only a part of the equation. Deterring Beijing requires U.S. forward presence with sufficient modern capability; that, more than anything else, will determine whether the 2020s remain peaceful.

This piece was originally published by 19fortyfive.com.