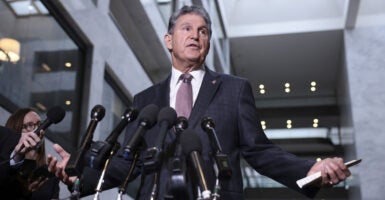 The Congressional Budget Office says it's "unclear" when it will be able to estimate the cost of the spending bill. Pictured: Sen. Joe Manchin, D-W.Va., has expressed concerns over the price tag of the spending bill, calling it "fiscal insanity." (Photo: Anna Moneymaker/Getty Images)

Capitol Hill staffers are working around the clock to hammer into some twisted shape a spending bill that warring factions of the Democratic Party will support in their goal to transform America.

The cradle-to-grave subsidies in the 2,448-page, $3.5 trillion spending bill that Democrats in Congress are crafting will create a welfare trap for millions more Americans, send inflation soaring, and drive our nation much deeper into debt.

Economic policy professor Chuck Blahous of the Mercatus Center at George Mason University analyzed the health benefit proposals in the spending bill. He wrote that expanding Medicare, Medicaid, and “so-called Obamacare” will “represent a major escalation of the fiscal irresponsibility lawmakers have practiced for the past several years.”

Former White House chief economist Casey Mulligan, now a professor at the University of Chicago, wrote that the spending bill would “implement the single largest permanent increase in work disincentives since the income tax came into its own during World War II.”

“The implicit employment and income taxes in [this legislation] would increase marginal tax rates on work by about 7 percentage points,” he wrote. “I expect that such a change in the disincentive would reduce full-time equivalent employment by about 4.5%, or about 7 million jobs.”

University of Chicago professor Charles Lipson wrote in “It’s Not the Top-Line Number—It’s the Bottom-Line Goal” that the spending bill would fundamentally transform the United States into a European social welfare state.

“Progressives know—and the whole country should understand—that piling on these vast new programs would be a major step in turning the United States into a European-style social democracy, along the lines of France, Germany, Spain, or Italy,” Lipson wrote. “Voters never elected [Joe] Biden to do that.”

The legislation is so huge and complex that even the Congressional Budget Office says “it is unclear” when it will be able to estimate the cost of the full spending bill, which is itself a moving target.

Congressional Budget Office Director Phillip Swagel wrote in a letter to Senate Minority Leader Mitch McConnell, R-Ky., last week, “The agency has not estimated how the entire package would affect direct spending, revenues, deficits, or spending that would be subject to appropriation. [The Congressional Budget Office] also has not completed its analysis of all of the mandates that the bill might impose on intergovernmental or private-sector entities.”

He says that instead of doing their primary job of estimating costs, Congressional Budget Office experts are spending time with congressional staff drafting the complex bill.

John Goodman, president of the Goodman Institute for Public Policy Research, wrote that the proposed bill is “throwing good money after bad” instead of focusing “on rational reform of existing programs.”

Because entitlements comprise so much of the new spending, Goodman wrote, “The Committee for a Responsible Federal Budget estimates that the full cost is not the $3.5 trillion that has been widely advertised, but at least $5 trillion and possibly as much as $5.5 trillion.”

Apart from direct federal spending, there are other huge costs to the private economy.  It would cost about $171 billion in the first year just to provide the salaries and facility spaces to meet the demand for increased subsidized child care, according to an analysis by Tara O’Neill Hayes of American Action Forum.

In a dozen or so charts, Blahous shows how the spending blowout will influence the vast number of affected programs. “In practical terms, the current trend must stop,” he wrote. “No population will tolerate its discretionary income perpetually shrinking to support lawmakers’ addiction to promising bigger health benefits.”

Halloween is the new target date for passage. We should all be scared. When even the Congressional Budget Office is daunted in figuring out how much the monstrous bill would cost, it is way past time to press “pause,” as Sen. Joe Manchin, D-W.Va., pleads.