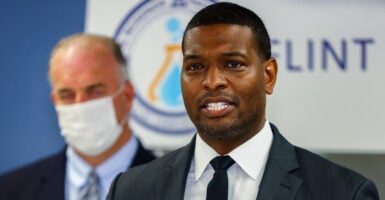 A lawsuit alleges that the Environmental Protection Agency "purged" industry representatives from two key advisory committees "in order to stack those committees with academics who are financially beholden to EPA." Pictured: EPA Administrator Michael Regan speaks to reporters July 7 during a visit to the Flint Community Water Lab in Flint, Michigan. (Photo: Rey Del Rio/Getty Images)

The Biden administration’s Environmental Protection Agency is violating the law in a “purge” of advisory committees in order to “rubber-stamp” regulations, a lawsuit alleges, and in the process sweeping away a Trump administration policy against conflicts of interest.

The lead plaintiff in the case is Stanley Young, who in March was ousted from the EPA’s Science Advisory Board. Young previously worked for Eli Lilly, GlaxoSmithKline, and the National Institute of Statistical Sciences.

“In an unprecedented purge, EPA eliminated all industry representatives from two important advisory committees in order to stack those committees with academics who are financially beholden to EPA for multimillion-dollar research grants,” reads Young’s complaint, filed in U.S. District Court for the District of Columbia.

The lawsuit identifies the Environmental Protection Agency panels in question as the Science Advisory Board and the Clean Air Scientific Advisory Committee.

The complaint says of the Environmental Protection Agency under Administrator Michael Regan:

Through this mass dismissal, EPA guaranteed that the committees will rubber-stamp the new administration’s regulations without the inconvenience of an objecting voice from the very industries targeted by those regulations and bearing the cost of those regulations, to the tune of billions of dollars a year.

These newly constituted, industry-free advisory committees are neither fairly balanced, nor protected from inappropriate influence in violation of the Federal Advisory Committee Act.

The Federal Advisory Committee Act requires that each board or committee must be “fairly balanced in terms of the points of view represented and the functions to be performed by the advisory committee.”

During the Trump administration, to avoid conflicts of interests, individuals associated with organizations getting federal grant money were prohibited from serving on federal advisory boards.

However, after the Biden administration took over, Regan restored recipients of federal grants as members of advisory panels—meaning, critics say, the grant recipients could be beholden financially to the administration’s political goals.

“EPA also abandoned—again without acknowledgment or explanation—its policy of addressing grant-based conflicts of interests on an individual appointment-by-appointment basis,” the lawsuit says.

Former President Donald Trump appointed Young, the lead plaintiff in the case, to a three-year term in 2017 and reappointed him in 2020. After taking office as EPA chief, Regan cut short the terms of Young and other industry representatives.

The EPA did not respond to The Daily Signal’s request for comment for this report.

Conservatives who are not parties to the lawsuit took notice.

The Young v. EPA case is “hugely important” to protect the intent of federal law requiring a balanced and independent panel of qualified scientists, said Steve Milloy, senior policy fellow at the Energy and Environment Legal Institute and author of “Scare Pollution: Why and How to Fix the EPA.”

“The Biden EPA has turned the law on its head by first deciding what its policy is and then stacking the panel with its cronies,” Milloy said in a public statement, adding:

These EPA cronies are academic researchers who have been awarded tens of millions of dollars’ worth of EPA grants. This will not be independent and balanced scientific review. Rather, it will be the rubber-stamping of EPA’s predetermined policy in contravention of congressional intent.

EPA appears to be engaging in cronyism, said Garrett Bess, vice president of Heritage Action for America, the grassroots partner organization of The Heritage Foundation. (The Daily Signal is Heritage’s multimedia news organization.)

“[President Joe] Biden is again showing just how radical his administration is, by stacking advisory committees with left-wing academics, who depend on government grants, to rubber-stamp the left’s extreme job-killing agenda,” Bess said in a public statement.

“At every opportunity, the Biden administration has chosen to implement policies that hurt American businesses and workers,” Bess said, adding:

Now, [Biden] has rigged the advisory boards to hide the harm these ‘Green New Deal’ policies will cause. Heritage Action will continue to call attention to just how extreme Biden’s economic policies really are, even as he tries to hide the impact from the American people.