Biden’s Taxes Hit Americans at the Top and Bottom 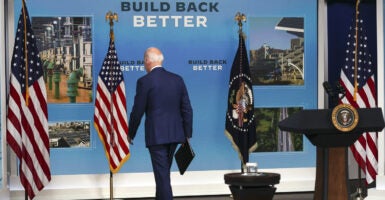 President Joe Biden claims the massive new government entitlements in his “Build Back Better” plan will be paid for by “corporations and those at the very top.” However, the taxes in the plan would hit low- and middle-income Americans with diminished savings, lost jobs, lower wages, higher prices, and more taxes.

The House of Representatives version of the plan aims roughly three-quarters of its tax increases at businesses, either directly or through capital gains.

On the surface, soaking American businesses sounds to some like a good way for the government to fill its coffers. As the saying goes, the only fair tax is the one someone else pays.

However, if implemented, the proposed taxes will hit the pocketbooks of anyone with a 401(k), anyone that works for a business in America, and anyone that buys U.S. products. In short, a tax on American businesses is a tax on all Americans.

Businesses—especially large ones—make nice scapegoats. However, we rely on them for almost all the goods and services we enjoy. Most American households rely on businesses for one or more paychecks. If the federal government destroys American businesses through punitive taxes, American consumers will be able to buy fewer goods and services but at higher prices. Recent estimates show that labor, not capital, bears most of the burden of corporate income taxes.

Suppose Congress and Biden move forward with the proposed $1.5 trillion in new business taxes. Before the ink dries on Biden’s pen, many investors in U.S. businesses will rush for the doors, driving down the stock market and slashing the value of Americans’ retirement savings.

If an American company wants to invest in a new factory, the exodus of investors will make it difficult for the company to raise funds. Businesses will abandon otherwise attractive investment opportunities like new buildings, machinery, and equipment.

Abandoned business investments will mean fewer jobs. American workers that would have been employed at a new factory may instead find themselves unemployed.

At other businesses, workers will remain employed but will lose out on bonuses and pay raises. With higher unemployment, American workers will have less leverage to negotiate with their employers.

To avoid what would become one of the least friendly business tax environments in the developed world, some businesses will choose to move or keep operations abroad, rather than expand in the U.S.

It is difficult to estimate the exact scale of the job losses this behemoth 2,465-page bill will cause. Few people have read the whole thing, nobody fully understands it. What we know is that in addition to the new taxes, it also contains new mandates on employers and added benefits to those not working. None of this is a recipe for growth.

Who will be affected the most by any government-induced job losses? If history is any indication, Americans working in manufacturing, transportation, construction, oil, gas, and mining jobs stand to suffer the most.

If the U.S. economy sputters, blue-collar workers will suffer more than their fair share of job losses.

For example, nearly $100 billion of new and increased federal taxes on tobacco and nicotine are left out of the published impacts of the federal tax provisions.

Also contributing to confusion, official estimates classify new social welfare payments as federal tax cuts—even payments going to Americans that pay no taxes. The House bill adds more than $600 billion of “refundable” tax credits. To most Americans, a refund means getting back money they paid. To the IRS, refundable means it can send out checks to people that claim the credits, regardless of whether that individual paid a single penny of tax.

The most detrimental part of the House bill, though, is not that it would impose harmful new taxes. It is that those tax revenues would go toward a socialist wish list of programs that ingrain entitlements and threaten America’s future prosperity.

The U.S. has $28.4 trillion of debt and its existing entitlement programs face insolvency. Rather than shoring up the debt or making pro-growth reforms, the new spending would only discourage work and foster a culture of dependency that robs people of purpose and dignity.

How will future generations deal with the debt we are laying at their feet if they are not raised in a culture that values hard work and entrepreneurship?

The American people don’t need more taxes and government programs. They need the federal government to get out of the way, quit spending their money, and stop trying to control every aspect of Americans’ lives.