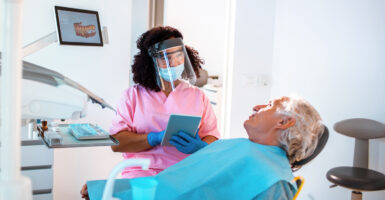 Democrats are currently trying to include provisions in the massive government expansion bill that would add new dental benefits to Medicare, the federal health insurance program for seniors. (Photo: Geber86/Getty Images)

The massive government expansion bill that congressional Democrats are currently trying to enact includes provisions that would add new dental benefits to Medicare, the federal health insurance program for seniors.

Yet that might prove to be an unpopular move once seniors realize that the proposed changes could leave them with worse dental coverage than they currently enjoy.

We’ve run the numbers and found that millions of seniors already have dental coverage that is as good as, or better than, what is proposed in this bill. Furthermore, they are getting that better coverage through private Medicare Advantage plans, which seniors can choose as an alternative to traditional government-run Medicare.

The benefits that Democrats want to add to Medicare are inferior to what is already offered to seniors through the privately-run Medicare Advantage. Seniors can choose to opt into Medicare Advantage, a program in which private plans—not government politicians—create benefits based on what their enrollees demand.

Of the Medicare Advantage plans that include dental benefits, 82% cover both preventive and major dental care; 16% cover only preventive care; and 2% cover only major care. Furthermore, 77% of plans that cover preventive dental care provide coverage without any deductible, coinsurance, or copayment charged to the enrollee.

Thus, for the 26 million seniors who currently have dental coverage through a Medicare Advantage plan, the proposed legislation would essentially offer them coverage that they already have, but with higher out-of-pocket costs.

Under the Democrats’ proposed approach, the government would force dentists and ancillary dental professionals to accept Medicare set payment rates for treating Medicare beneficiaries—which could result in fewer dentists being willing to treat Medicare patients.

Based on what happened when the Medicare program set payment rates for other doctors and health professions in the past, there is ample reason to worry that this approach would discourage some dentists from seeing Medicare patients. Those most at risk are seniors who currently have dental benefits through an employer or union retiree plan or a supplemental plan that they purchased directly.

Another risk is that Medicare Advantage insurers might respond to the bill’s passage by imposing enrollee deductibles, coinsurance, or copayments for dental coverage in more of their plans. That’s because, under current law, Medicare advantage plans are required to offer at least the benefits provided by traditional Medicare, and Medicare’s payments to Medicare Advantage plans are calculated with reference to traditional Medicare spending.

Adding dental benefits to traditional Medicare accompanied by government price-setting would effectively rebase downward the expectations for coverage under Medicare Advantage plans. That would open the door to the possibility of Medicare Advantage plans trying to save money by paying dentists less, imposing cost sharing on enrollees, or narrowing their networks of covered dentists.

And if Congress goes through with another idea that congressional liberals like—cutting payments to Medicare Advantage plans—the chance of those changes happening becomes significantly greater.

That means the prospect of seniors facing reduced access to dental care, and higher out-of-pocket costs, at least in some localities, is a realistic possibility.

Congress should simply discard these provisions.

Medicare Advantage’s private insurers have amply demonstrated that they are able and willing to offer quality dental coverage to seniors with little or no out-of-pocket costs for preventive care, and good financial protections against the costs of major treatments. The right way to improve benefits isn’t more government micromanagement that gets in the way what’s working. Instead, Congress should build on existing success with regulatory reform that gives private plans even more flexibility to keep designing attractive options seniors want.