Why We Don’t Need ‘Human Infrastructure’ 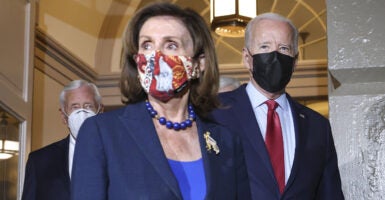 It's shameful to call expansions of the welfare state "human infrastructure," as if the human person were a structure to be supported by the state. Pictured: House Speaker Nancy Pelosi walks with President Joe Biden on Friday as he arrives to meet with House Democrats at the Capitol. (Photo: Kevin Dietsch/Getty Images)

Self-styled progressive Democrats demand that Congress pass a “human infrastructure” package that would provide funding for “free” college and preschool, alongside other social agenda items.

Jon, a man whose story I know, would have called it a “government package.” Jon, who is middle-aged, had a HUD housing voucher and food stamp benefits, and was on track for disability approval.

None of it helped Jon with his chronic addiction and cyclical homelessness, though. And that was why he stood in my office asking to join our residential long-term recovery program.

Program participants agree to give up all pursuit of government aid and to work toward self-reliance instead. Jon did it. He went on to gain full-time employment as an over-the-road truck driver and, in doing so, independence from the state.

During an interview at a local radio station, Jon said: “Giving up that government package was the hardest decision I had ever made in my life.”

Jon called it a government package. House Speaker Nancy Pelosi might call it human infrastructure. It’s a term I’d never heard until late August, when the California Democrat championed the idea from the House floor.

Maybe it was because Pelosi placed the $3.5 trillion social spending package alongside a bill that deals more with trusses, concrete, and rebar that I felt denigrated to something a little less than human.

Fighting poverty on the front lines over the past two decades has taught me to see the unique capacity and inherent dignity in every person. I’ve also learned that handouts, whether private or public, tend to rob people of dignity and self-worth.

Yet, a large chunk of this $3.5 trillion proposal (more than $700 billion) is to provide just that—handouts in the way of “free” college, “free” pre-K, and “free” day care.

It’s shameful to call these expansions of the welfare state “human infrastructure.” The human person is not a structure to be supported or undergirded by the state.

Contrary to the pitch made by Pelosi, Senate Majority Leader Charles Schumer, President Joe Biden, and its other promoters, if passed into law this massive spending boondoggle will be both wasteful and harmful.

“Free” stuff from the government results in poor stewardship and price increases, and wears away at the true undergirding of America’s greatness—civil society.

First, people don’t tend to care for free stuff. A school administrator called me one day for advice on the issue of poor stewardship. School supplies handed out with free backpacks were strewn about lockers and hallways. She was frustrated by the carelessness of her students.

“It’s natural for us to care more about things we’ve worked for,” I told her.

College is no exception. “Free” college already has proven to be more a failure than success. The first major study of graduation rates for Pell Grant recipients revealed that less than half (41%) graduate, compared with 61% of their non-Pell counterparts.

Second, government handouts drive up costs. “Free” child care sounds good, but there’s a price to pay. In the United Kingdom, that price to pay rose significantly. After the U.K. instituted “free” child care for 30 hours per week in 2017, day care prices shot up by 7%.

It’s no wonder. When the government purchases private sector services, the market responds, hurting non-qualifying families who are forced to pay market price.

Lastly, not only is it impossible for the government to provide real “human infrastructure,” but the attempt to do so is certain to undermine further a primary foundation of America’s greatness, which is civil society.

Interdependency found in natural associations within communities has made America great. The more we depend on the state, the less we lean on one another.

The French historian and political philosopher Alexis de Tocqueville warned us in his early 19th-century biography of the United States, “Democracy in America”: “The more [the government] puts itself in place of associations, the more particular persons, losing the idea of associating with each other, will need it to come to their aid.”

Pelosi clearly believes we need government to come to our aid. But to support her plan for “human infrastructure” is to support the erosion of a life more responsible, affordable, and relational.

Last year, Jon paid me a surprise visit. It was good to see him and to note the contrast from the person who had stepped in my office a few years back.

I asked him, “Of all the components in our program, what made the difference?”

He responded immediately: “My mentor.”

The local businessman who built a relationship with Jon was pivotal to his recovery. It wasn’t Jon’s “government package” that helped him, and it won’t be Pelosi’s “human infrastructure” package that will help us.

Genuine compassion, personal charity, and real relationship is what we need.