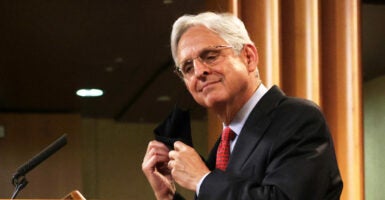 Attorney General Merrick Garland issued a memo on Monday that essentially directs the Department of Justice and the FBI to intimidate parents who oppose the teaching of critical race theory in schools. (Photo: Alex Wong/Getty Images)

Attorney General Merrick Garland issued a memo on Monday directing the Department of Justice and the FBI to “launch a series of additional efforts in the coming days designed to address the rise in criminal conduct directed toward school personnel.”

The Garland memo looks like an effort to use the FBI to threaten and silence parents who are outspoken opponents of critical race theory in schools. That alone would be a stunning partisan abuse of power.  What Garland has done, however, is even more disgraceful.

Maybe Garland doesn’t actually intend to use the FBI to go after parents—maybe he knows that he doesn’t have that power. In that case, he’s trying to trick parents into thinking that he does. This tactic, he hopes, will suppress parents’ free speech, and throw a bone to a powerful ally of his political party.

Even a few FBI agents questioning parents may be enough to convince others that standing up for their values is not worth the risk.

To understand what Garland is doing with this memo, you’ll need a short primer on the background facts and government legalese.

This claim is parroted from a letter sent to President Joe Biden by the National School Boards Association—a powerful leftist group representing many of the school boards around the country pushing critical race theory curricula. That letter made vague claims about “threats and acts of violence” against school board members from parents who oppose critical race theory.

The letter complained about “disruptions” by angry parents but managed to find only one example of violence against a school official (likely a security guard), which was handled by local law enforcement.

Most of the letter is the National School Boards Association clutching its pearls, aghast that justifiably angry parents are zealously advocating for their children’s interest. The tactics thus far employed certainly are nothing compared to the riots of the summer of 2020 that destroyed over a billion dollars in property and resulted in multiple deaths.

Those tactics were not decried by the National School Boards Association and its liberal friends. In fact, the current vice president organized financial support to the criminals engaged.

The National School Boards Association is not really concerned about an isolated instance of violence adequately handled by local law enforcement. It is much more upset that it is powerless to stop parents from exercising their First Amendment rights to push back against critical race theory in the classroom.

And so, in a move that is nearly a reflex among many leftist organizations, it asked the government to lend it some of its law enforcement power to shut up its meddling critics. Garland was only too happy to oblige. In doing so, he has made a hypocrite out of himself and Biden.

When Biden announced Garland’s nomination, he promised to uphold the independence of the DOJ from the political influence of the White House. Garland promised the same, saying:

I have spent my whole professional life looking up to Ed Levi and the other post-Watergate Attorneys General who stood up on behalf of the Department against impermissible pressure and influence. If I am confirmed as Attorney General, I intend to do the same.

There is no clearer example of political influence seeping into the DOJ than a demand letter to the president from a leftist advocacy group turning into a DOJ memorandum in less than a week.

But Garland’s weaponization of the DOJ has a problem: There is no conceivable basis for federal law enforcement action against these parents.

Unlike Attorney General Eric Holder, who twisted and abused the Freedom of Access to Clinic Entrances Act to silence pro-life advocates, Garland can’t find any law that he can similarly mangle to silence parents. If he could, he would have put it in the memo.

But the parents don’t know that.

And here enters the government legalese. Garland’s memo fails to cite any basis for law enforcement action by the DOJ or the FBI, but it hides that with a morass of official language that says nothing more than that federal law enforcement will provide some advice to local school boards.

FBI agents and federal prosecutors (who have nothing better to do, apparently) will travel the country giving school boards the phone number of their local police and the web address of the FBI’s internet tip line.

After the sound and fury calms, nothing beside remains.

What do we make of all this?

First, there is no reason to bring federal law enforcement into this; local authorities have this under control.

Second, Garland has demonstrated, disappointingly, that he is beholden to powerful leftist political groups and perfectly happy to let them use the threat of federal government’s law enforcement power to suppress their critics’ right to free speech. The promised impendence of the DOJ is a farce.

Fourth, some good news, parents need not be afraid. It is their constitutional right to push back in legal ways against schools teaching children critical race theory.

Go forth to the school boards and make your voices heard.