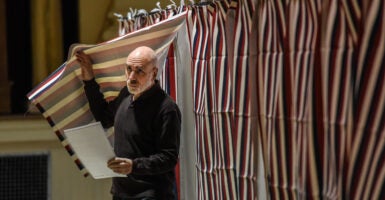 The small cities of Montpelier and Winooski will allow noncitizens to vote in their local elections. Pictured: A man exits a booth after voting at Montpelier Town Hall in Vermont on Nov. 6, 2018. (Photo: Stephanie Keith/Getty Images)

Noncitizens will be able to vote in two Vermont cities as part of a growing national trend, unless lawsuits prevent new laws from taking effect.

The cities of Montpelier, with about 7,375 residents, and Winooski, with about 7,335, both will allow noncitizens to vote in local elections for offices such as mayor, city council, and school board.

Related changes to the two city charters required the approval of voters as well as the state’s Democrat-controlled Legislature, which in June overrode a veto by Vermont Gov. Phil Scott, a Republican.

“These are very liberal cities with progressive Democrats,” Rob Roper, president of the Ethan Allen Institute, a free-market think tank based in Montpelier, told The Daily Signal.

“Throughout much of the state, there is a general distaste for allowing anyone other than citizens over the age of 18 to vote,” Roper said. “Many oppose the idea [of noncitizen voting] and worry about the precedent.”

The Republican National Committee and the Vermont Republican Party last week filed a lawsuit against each city in Vermont Superior Court, asserting that the state Constitution says only U.S. citizens over the age of 18 are qualified to vote in Vermont.

Elsewhere in liberal states, San Francisco, Chicago, and several jurisdictions in Maryland already allow noncitizens to vote in at least some local elections. Meanwhile, municipal lawmakers in New York City and Los Angeles are among those considering similar proposals.

Vermont is one of the least populous states in the nation. Just 4.7% of the population is foreign-born in a state that is 94.2% white, according to U.S. census data.

“Winooski has a very large refugee population and is the only majority-minority legislative district in the state,” he said. “There is an illegal immigrant constituency that is hired by the dairy farms.”

A Montpelier official did not respond Monday to an inquiry from The Daily Signal.

Montpelier Mayor Anne Watson told the news site VTDigger that a “clear majority of Montpelier voters voted to have this measure.”

“We are a nonpartisan local government here in Montpelier, and it’s unfortunate that this has been made a partisan issue,” Watson, an independent, said.

Elections in Winooski officially are nonpartisan. Mayor Kristine Lott emailed The Daily Signal a copy of the public statement she made to Winooski residents last week after the Vermont Republican Party and the Republican National Committee filed the lawsuits.

“More than two-thirds of Winooski voters supported this change, which I believe is an important step in improving equity in our community,” Lott said, adding:

This charter change would give an elevated voice to a tenth of our residents who send their kids to our schools, pay their taxes, create economic opportunities, and enrich Winooski’s cultural and social fabric. There is no reason to expect residents to contribute without representation in our local elections. Many residents spend years living in Winooski while their path to citizenship is lengthy, expensive, and full of barriers.

I am disappointed by this lawsuit, but more importantly, I remain proud of the work that has gone into this process by our voters, commissioners, councilors, and representatives.

While the cities of Winooski and Montpelier are directly named in these lawsuits, it is worth pointing out that the state Legislature supported and approved our charter change.

The state of Vermont made the legally binding amendment to our charter and in the end, the Supreme Court of Vermont may well have to weigh in.

Ronna McDaniel, chairwoman of the Republican National Committee, noted that Democrats have pushed noncitizen voting and opposed voter ID requirements, both of which undermine trust in elections.

“Republicans are fighting back on this far-left assault against election integrity—unlike radical Democrats, we believe that our elections should be decided solely by American citizens,” McDaniel said in a public statement. “This is a matter of principle and we will fight in all 50 states to ensure this remains the case.”

A 1996 federal law specifically prohibits noncitizens from voting in federal elections for president or members of Congress. However, the law doesn’t dictate what local governments can do.

The action by the two Vermont cities, and in other jurisdictions nationally, could be about changing the electorate in the long term, said J. Christian Adams, president of the Public Interest Legal Foundation, which advocates election reforms.

“Democrats are playing the long game,” Adams told The Daily Signal. “This is virtue signaling. The long-term play is to normalize ineligible foreigners to voting in all American elections.”

“Take small bites of the loaf and say, ‘It’s only local elections,’” Roper said of the strategy. “Eventually, you could argue it’s such a pain for town clerks to keep two voter lists [one for local elections, another for state and national]. You can imagine politicians asking, ‘Why can’t the people working on the dairy farms vote?’ These are incremental moves.”

Interestingly, so-called voting rights organizations such as Fair Fight, founded by former Georgia state Rep. Stacey Abrams, and the Brennan Center for Justice at New York University, have not weighed in on the RNC lawsuits.

“I wouldn’t oppose it,” Abrams, an unsuccessful Democratic candidate for Georgia governor in 2018, said in January 2019 when asked about noncitizens voting in local elections.

“I think there’s a difference between municipal and state and federal,” Abrams said. “The granularity of what cities decide is so specific, as to, I think, allow for people to be participants in the process without it somehow undermining our larger democratic ethic that says that you should be a citizen to be a part of the conversation.”

Fair Fight, the Brennan Center, and the Vermont chapter of the American Civil Liberties Union—which routinely opposes voter ID laws and other election security policies—did not respond to inquiries Monday from The Daily Signal.

Whether it’s a local or national contest, any noncitizen who wants to participate in elections should commit to become a citizen, said Hans von Spakovsky, manager of the Election Law Reform Initiative at The Heritage Foundation, which is the parent organization of The Daily Signal.

“It’s a very bad idea to allow noncitizens to vote. Voting is a very special right and it should only be given to citizens who have a hand in the democratic institutions that we have,” von Spakovsky told The Daily Signal. “Noncitizens don’t have that, because they haven’t made the commitment to become citizens.”

Have an opinion aboout this article? To sound off, please email letters@DailySignal.com and we’ll consider publishing your edited remarks in our regular “We Hear You” feature. Remember to include the URL or headline of the article plus your name and town and/or state.