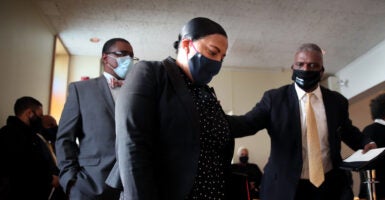 It brings us no joy to say we were right. But we predicted last year that a disaster-in-the-making would unfold if President Joe Biden selected rogue prosecutors from around the country to become rogue U.S. attorneys.

Some were specifically floating the name of Rachael Rollins, the rogue Suffolk County district attorney in Boston, as a potential pick to become the chief federal law enforcement officer—the U.S. attorney—in Massachusetts.

That came to pass, and Biden nominated her for the position. On Thursday, the Senate Judiciary Committee advanced her nomination on a tied vote (11-11). Now, the full Senate will have an opportunity to consider her nomination.

Rollins’ conduct as a rogue district attorney has certainly been problematic. As Sen. Tom Cotton, R-Ark., made clear at Thursday’s hearing, “It’s . . . rare for the president to nominate a radical, pro-criminal prosecutor for a U.S. attorney position.”

In fact, we cannot think of any other time in recent (or, frankly, distant) history where this happened.

Cotton said that “Rachael Rollins is the very epitome of a Soros prosecutor”—we call them rogue prosecutors—because of her radical pro-criminal, anti-victim policies that harm victims, harm communities, and attempt to fundamentally transform our criminal justice system.

Cotton said, “Rollins, like San Francisco’s Chesa Boudin and Philadelphia’s Larry Krasner and Los Angeles’ George Gascon, are out to destroy the criminal justice system from within.”

He—along with Sen. Ted Cruz, R-Texas—pointed out that Rollins had the audacity to put forward a list of 15 crimes that someone can now commit in Boston under her watch without fear of being prosecuted—including those who possess dangerous illegal drugs such as heroin, cocaine, and fentanyl with the intent to distribute them to others. In other words, she won’t prosecute drug dealers.

Cotton summed up the problem succinctly when he said, “If Rachael Rollins wants to advocate for criminals to be released instead of for the law to be enforced, there’s a place for her in our government: It’s called the public defender’s office. But with Rollins as a prosecutor in name only, the criminals have two advocates in the courtroom—the prosecution and the defense—while the victims of crime would have none.”

That’s unacceptable. If Rollins becomes U.S. attorney, which sadly seems likely, she must mend her ways, do her duty, and enforce the laws as they are written.

That’s unlikely to happen, which should sadden and terrify us all.