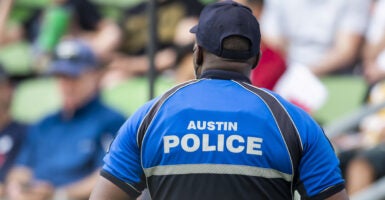 Amid the “defund the police” movement, the Austin City Council cut the police budget by about one-third and eventually lost 150 officers as crime soared. Pictured: An Austin police officer stands watch July 29 during the Gold Cup semifinal match between the U.S. and Qatar at Q2 Stadium in Austin. (Photo: Nick Tre Smith/Icon Sportswire/Getty Images)

Drivers heading south on U.S. Route 183 in Austin, Texas, have become familiar with a billboard urging city police officers to relocate to Spokane, Washington, to become deputy sheriffs and collect a $15,000 bonus.

The Spokane County Sheriff’s Office has targeted Texas’ capital city, already in a personnel crunch as the homicide rate reached a record high, along with other jurisdictions that recently slashed police budgets.

Amid the “defund the police” movement in 2020, the Austin City Council cut the police budget by about one-third and eventually lost 150 officers. In August, shortly before the city reached its all-time record for annual homicides, the council restored the funding.

“Austin is an incredibly fast-growing city. So we have more people coming in. We are losing about 15 police officers a month,” Lars Trautman, national director of the Right on Crime program for the Austin-based think tank Texas Public Policy Foundation, told The Daily Signal.

“And now we have a giant billboard go up along one of our highways from the Spokane Sheriff’s Department trying to lure our police officers away,” Trautman said. “It’s certainly not something that Austin residents like to see on their drive to work in the morning.”

The Austin City Council restored the police budget and then some, largely to comply with a new Texas law that withholds state aid to jurisdictions that defund their police forces.

But the Austin Police Department still struggles with a personnel shortage.

The council’s budget cut last year brought the number of officers from 1,949 to 1,809. However, as of Thursday, the Austin Police Department employed 1,612 officers, a police spokesman told The Daily Signal.

The council voted 9-2 late Thursday night to confirm department veteran Joseph Chacon, who is white, as the city’s new police chief over the objections of NAACP leaders and other activists who favored one of two black candidates from the Los Angeles and Dallas forces.

Chacon, previously an assistant chief, had served as interim chief for about six months when City Manager Spencer Cronk appointed him to the post on a permanent basis last week, the Austin American-Statesman reported.

The newspaper reported that the council’s vote to confirm Chacon as chief came a day after he announced that the department no longer would respond to some calls due to limited staffing, including burglary in cases where the intruder has left the scene, plus auto theft, vandalism, and other thefts.

The homicide rate this year in Austin, with a population topping 950,000, is the highest recorded in the 61 years such data has been available.

As of Sept. 12, 60 homicides had occurred so far in 2021, more than in any full calendar year on record, according to statistics compiled by KVUE-TV, Austin’s ABC affiliate, and the Austin American-Statesman newspaper using a combination of local and FBI crime data.

From June 2020 through April 2021, Austin’s homicide rate increased by 44% from the same period a year earlier, according to data from the Law Enforcement Legal Defense Fund, a national group that provides legal defense for police.

Crime began to spike across the nation in the wake of protests and riots that followed the death of a black man in the custody of Minneapolis police on May 25, 2020.

“Violent crimes, homicides, nonfatal shootings, [and] carjackings have gone up in cities that target their police,” Johnson told The Daily Signal. “Restoring funding doesn’t restore a police department. Many of the officers leave these departments for self-preservation.”

“When you have a city like Austin, which cut their budget by a third in the course of one year and has an ongoing officer shortage, certainly … common sense and research would suggest that might be related to the homicide spike we are seeing here,” Trautman said.

The 11-member Austin City Council unanimously voted last year to cut $21.5 million from the police budget and shift another $128 million to other city departments, which led to dissolving some police units and canceling cadet classes.

Mayor Steve Adler, also a member of the council, supported the budget cut. Council races officially are nonpartisan, but Adler and the other current council members are Democrats.

After Texas Gov. Greg Abbott signed legislation in June to penalize municipalities that cut police funding, the Austin City Council responded by voting for a $443 million police budget for fiscal year 2022, up 43% from $309.7 million in fiscal 2021.

The nation’s police forces, including the Austin Police Department, are working on recruitment.

“Across the nation, recruiting law enforcement officers is very competitive, and APD’s recruiting efforts stretch from coast to coast. We are currently advertising and recruiting in several major metropolitan areas around the country,” the Austin police spokesman said in an email to The Daily Signal, adding:

But pouring money back into the city’s police department is unfortunate, said Kathy Mitchell, policy coordinator for Just Liberty, an Austin activist group that advocated cutting the police budget.

In June, KVUE reported that violent crime in Austin has far outpaced the population, which has grown by 4% in the past five years, beginning in 2017.

Murder saw a 200% increase over five years, KVUE found. Aggravated assaults were up by 36% over the five years and car thefts by 77%. Only burglaries were down, by 9%.

Austin is spending about $30 million on efforts to “reimagine” police.

The co-chairs of Austin’s task force are Paula X. Rojas of the group Communities of Color and Brion Oaks, who is Austin’s chief equity officer.

Police do not spend most of their time addressing violent crime. Less than 1% of calls APD responds to are related to violent crime. Even then, there is often little they can do by the time they arrive.

‘Weeping and Gnashing of Teeth’

The money cut from Austin’s police budget went to hire paramedics and buy ambulances and to open another shelter for victims of domestic violence, Mitchell said.

The 911 dispatch operation and the forensic lab were separated temporarily from the police department, but were reconnected after the council restored funding, she said.

“The actual cuts last summer were not large. There was a rebucketing of divisions,” Mitchell said, adding that a temporary closure of the police academy and routine retirements led to staffing issues more than budget cuts did.

“There is an enormous amount of weeping and gnashing of teeth in this town because for a very short time, thanks to lawsuits and complaints and huge attrition problems at the police academy, the city closed it temporarily,” she said. “Is that a reason to panic? Absolutely not.”

The council’s increase in the police budget creates a new baseline, because the state law—passed by a Republican Legislature and signed by a Republican governor—prevents cities and other jurisdictions in Texas from decreasing funding for police departments as circumstances change.

“This has become a very strange fight where conservatives who once believed in smaller government and less spending are doubling down on the very, most expensive kind of staffing to do the maximum number of things,” Mitchell said. “This is a very strange place for the GOP to have ended up.”