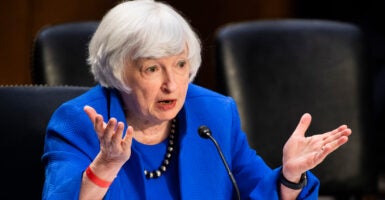 And let me say something on behalf of the people I represent in Wyoming. And this is not pointed to either party. This is pointed to the Congress of the United States. It is absolutely irresponsible that we are $28 trillion in debt, and that both parties sit here and blame each other for what they both did irresponsibly.

What we have done to the people of this country, it’s both parties’ faults. It’s the Congress’ fault, and we need to address it, but we’re so busy making each other look like the rat’s rear-end that we won’t address the real problems in this country that led us to be $28 trillion-plus in debt, and now asking to get further in debt.

That said, now I’ll turn my attention to the secretary. Secretary [Janet] Yellen, speaking of horrified, my constituents cannot believe that you support a proposal to require banks and credit unions to report customer data to the Internal Revenue Service for transactions of $600 or more. There are obvious privacy concerns for all Americans here, and this represents a dramatic new regulatory burden for community banks and credit unions in Wyoming and elsewhere.

Our banks will have to hire contractors to rat on their customers, implement new computer software, deploy resources better used elsewhere, in order to collect data for the government.

Bank customers are not subjects of the federal government. Banks do not work for the IRS. This is invasive of privacy. Wyoming’s people literally will find alternatives to traditional banks just to thwart IRS access to their personal information; not because they’re trying to hide anything, but because they’re not willing to share everything.

My question is, are you aware of how unnecessary this regulatory burden is? Do you distrust the American people so much that you need to know when they bought a couch or a cow?

I am astounded by what you’re supporting and proposing. I think it’s invasive. I think privacy for individuals is getting ignored. And I think treating the American people like they are subjects of the government is unconscionable.

Treasury Secretary Janet Yellen: Well, Sen. Lummis, I really disagree with the assessment that you have. And I think you misunderstand the proposal.

Banks already report directly to the IRS the interest that they pay on accounts when it exceeds $10. And this is not a proposal to provide detailed transaction-level data by banks to the IRS.

It is a proposal to add two additional pieces of easily ascertained information onto the 1099-INT Form that banks already file; namely, the aggregate inflows into the account during the year and the aggregate outflows.

And I think it’s important to recognize that we have a tax gap that’s estimated at $7 trillion over the next decade. That is taxes that are due and are not being paid to the government that deprive us of the resources we need to do critical investments to make America more productive and competitive.

And the reason that that tax gap, in part, exists, partly it’s because the IRS has been deprived of revenue to hire auditors, but the IRS has a wealth of information about individuals.

If you work at a job where you get labor income, a W-2 is filed and sent. There are dividend payments and transactions payments that are sent to the government.

But there are a class of partnerships, businesses, high-income individuals who have opaque sources of income that the IRS doesn’t have direct information about. And that’s where the tax gap is, not low-income people.

Yellen: And this additional information would help …

Lummis: … $600 threshold is not usually where you’re going to find the massive amount of tax revenue you think Americans are cheating you out of.

Yellen: That’s correct, but it’s important to have comprehensive information so that individuals can’t game the system and have multiple accounts.

Lummis: Mr. Chairman, I yield back.