Biden’s Promise to Unite Us Was False. He Hasn’t Even Tried. 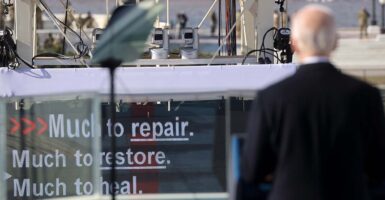 President Joe Biden delivers his inaugural speech after being sworn into office on the West Front of the Capitol on Jan. 20. In his speech, seen here on his teleprompter, Biden promised to be a president for all Americans, but he hasn't governed that way. (Photo: Jonathan Ernst/Getty Images)

President Joe Biden’s administration is now defined by soaring COVID-19 numbers, a botched Afghanistan retreat, and millions of Americans who are not simply unemployed, but are unwilling to work.

Biden campaigned on the promise of increasing America’s morale, enhancing our international standing, and doing a better job controlling COVID-19 than his predecessor.

But the exact opposite has occurred, and his poll numbers have plummeted.

The fact that there are still Americans in Taliban territory, with the United States powerless to protect them, is a source of tremendous anxiety for many Americans, as it should be.

Potential allies will be less willing to cooperate and aid the United States the next time we have to enter a conflict—and there will be a next time—out of fear of being left behind after we depart.

It also erodes the United States’ image as a military superpower on the international stage by taking unthinkable actions that appear to have been made without thought.

Biden assumed office at a time when the United States was as divided as it has ever been, promising to bring us all together to build a better future. Biden has not only failed to deliver on that promise, but he also has failed completely to even attempt it.

The United States is no more united than it was before Biden took office, and despite his claims of being able to turn things around and work across the aisle, he has yet to take any action to unify us.

Since the first $1.2 trillion stimulus package, Biden has not been able to achieve anything in a bipartisan way, and there have been no signs showing that he will even attempt to unify us going forward.

Biden is also deceiving millions of Americans by offering them false hope in the wake of the recent expiration of the pandemic unemployment benefits.

There are 8.4 million unemployed Americans, yet there are 10 million job openings. In fact, several businesses are offering bonuses and other attractive incentives to get potential employees to work for them.

However, for some, the promise of not having to return to work is a better choice than working, which is a problem, because those who refuse to work are staring at the working taxpayer, who must foot the bill.

During the pandemic, millions of Americans were out of work and collecting unemployment checks that oftentimes matched or exceeded their previous salaries. That caused mass complacency among the population—something that will severely impede progress as we move out of the pandemic and into normalcy.

It is also an issue for small firms seeking to resume normal operations as quickly as possible.

Biden has been unable to halt the delta variant of COVID-19 from wreaking havoc across the country and infecting children. In fact, several communities have reinstituted mask laws in response to delta and other unanticipated strains.

Some will point the finger at specific groups of people for their vaccine hesitancy, but leaders must lead even when it is challenging.

Biden has not been able to earn the trust of many Americans when it comes to COVID-19; nor has Dr. Anthony Fauci or the Centers of Disease Control and Prevention. That’s due to the many contradictory statements made by them during the pandemic on measures to keep people safe, which frequently resulted in companies closing and family members being separated for long periods of time.

Biden’s presidency has turned out to be the polar opposite of what he promised. He has not brought us closer together; in fact, we may be even more divided.

Nor has he restored our standing in the world. If he had, the British Parliament wouldn’t have condemned him because of the Afghanistan withdrawal.

He also has not protected us from COVID-19. New strains of the virus are entering the country. Finally, the economy appears to be slowing down due to inflation and COVID-19.

Biden has not improved America. In some respects, it has become worse. In other respects, things have stayed the same. As it turned out, the man who campaigned to restore America’s soul has not restored a thing.