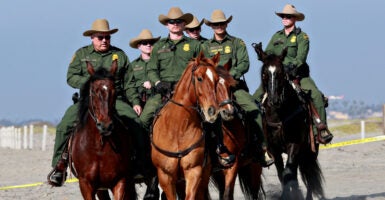 Since he took office, President Joe Biden has had a series of flubs that have called into question the basic competence of his administration.

Now, he’s punishing his employees who are actually doing their jobs.

Biden’s policies have utterly failed at the border, leading to a historic surge in border crossings since he took office and now a shameful pile up of migrants in Del Rio, Texas.

Instead of fixing the problem or acknowledging that the previous administration was successfully upholding U.S. immigration law, Biden has decided to malign the people on the border who are desperately working to contain the mess.

Last week, photos of Border Patrol agents on horseback went viral, with media outlets claiming that they were “whipping” migrants at the border.

The El Paso Times reported that a Border patrol agent “swung his whip menacingly, charging his horse toward the men in the river who were trying to return to an encampment under the international bridge in Del Rio after buying food and water in Ciudad Acuña, Mexico.”

The El Paso Times later corrected the story and said, “Our reporting team witnessed at least one agent on horseback swing his reins like a whip.”

But the photographer who took the viral pictures, Paul Ratje, said that he witnessed no whipping at all, and only noted that the Border Patrol agents were simply trying to apprehend the illegal migrants who were attempting to get around the horses.

“I’ve never seen them whip anyone,” Ratje said. “He was swinging it, but it can be misconstrued when you’re looking at the picture.”

So there were no whips, and the firsthand account by the photographer said that no “whipping” with the reins took place. Is the issue here that the Border Patrol agents were doing their jobs and trying to enforce U.S. border laws?

Following the release of the pictures, the Biden administration went into full-on disinformation mode with the help of their media allies.

There certainly were consequences for the Border Patrol agents who were there at the border doing their jobs. The administration suspended the use of horses, which have been used in border enforcement for most of the last century.

Horses perform particularly well in the particular conditions of the Southern border, according to the Border Patrol Museum. They are more useful off-road and do less damage to the environment.

With less environmental impact and reduced carbon emissions, you’d think the left would be all for it. But that’s not how this works.

Instead of fixing their failed policies and protecting their employees who’ve been utterly besieged, Biden and friends went into overdrive to promote the Narrative. The narrative in this case is that Border Patrol is mistreating migrants at the border, and that perhaps even border enforcement itself has sinister, racist implications.

Remember, this is the same administration that shamelessly called voter-reform laws in various states 21st century “Jim Crow.” They quickly jumped to drawing comparisons between Border Patrol and slavery.

“Human beings should not be treated that way,” Vice President Kamala Harris said of the migrants in an interview with The View. “It also invoked images of some of the worst moments of our history, where that kind of behavior has been used against the Indigenous people of our country. It has been used against African Americans during times of slavery.”

How predictable. Is there anything the administration doesn’t like that they won’t compare to slavery, or segregation, or Nazis?

When confronted with the mounting evidence that initial impressions of the Border Patrol photos were wrong, the administration has basically taken the line that it doesn’t matter.

When White House Press Secretary Jen Psaki was asked in a press conference on Monday if the now overwhelming evidence that Border Patrol agents were not using whips and were not using reins as whips would change anything about their response, she said: “Our reaction to the photos has not changed.”

The Narrative goes on and the truth can’t stop it.

Just to clarify how—to this administration—freedom is slavery and war is peace, Psaki said in the same press conference that the $3.5 trillion spending bill would “cost $0.”

Not only is the administration willing to manipulate information to fit its narratives, it also thinks the American people are stupid, apparently.

This would all be bad enough if these monumental distortions were simply the product of a failing presidential administration, but it’s clear that many media outlets are eager to help direct the narrative.

Axios published a Tweet saying that Border Patrol agents had been “whipping at” migrants. Axios eventually deleted the Tweet.

“We deleted a previous tweet that referred to Border Patrol agents as whipping at Haitian migrants. The story has been updated to include comments from some journalists on the border who did not see whipping occur,” the follow-up Axios tweet stated.

Notice how this statement is still a hedge and doesn’t acknowledge that the “whipping” didn’t take place.

It wasn’t just the media. Twitter is, as of this article’s publication, censoring a video produced by The Daily Signal in 2017 explaining the role horses play in border enforcement. Twitter labeled it “potentially sensitive content.”

With more migrants on the way to Del Rio, and the administration clearly willing to do little to curb the surge of migrants at the border, it’s hard to see this crisis ending any time soon.

If there is any silver lining to the story, Texas Gov. Greg Abbott pledged to hire the Border Patrol horseback riders if they lose their jobs.

Just as importantly, he said, “They can bring their horses, too.”

Maybe their service will be better appreciated under new management.